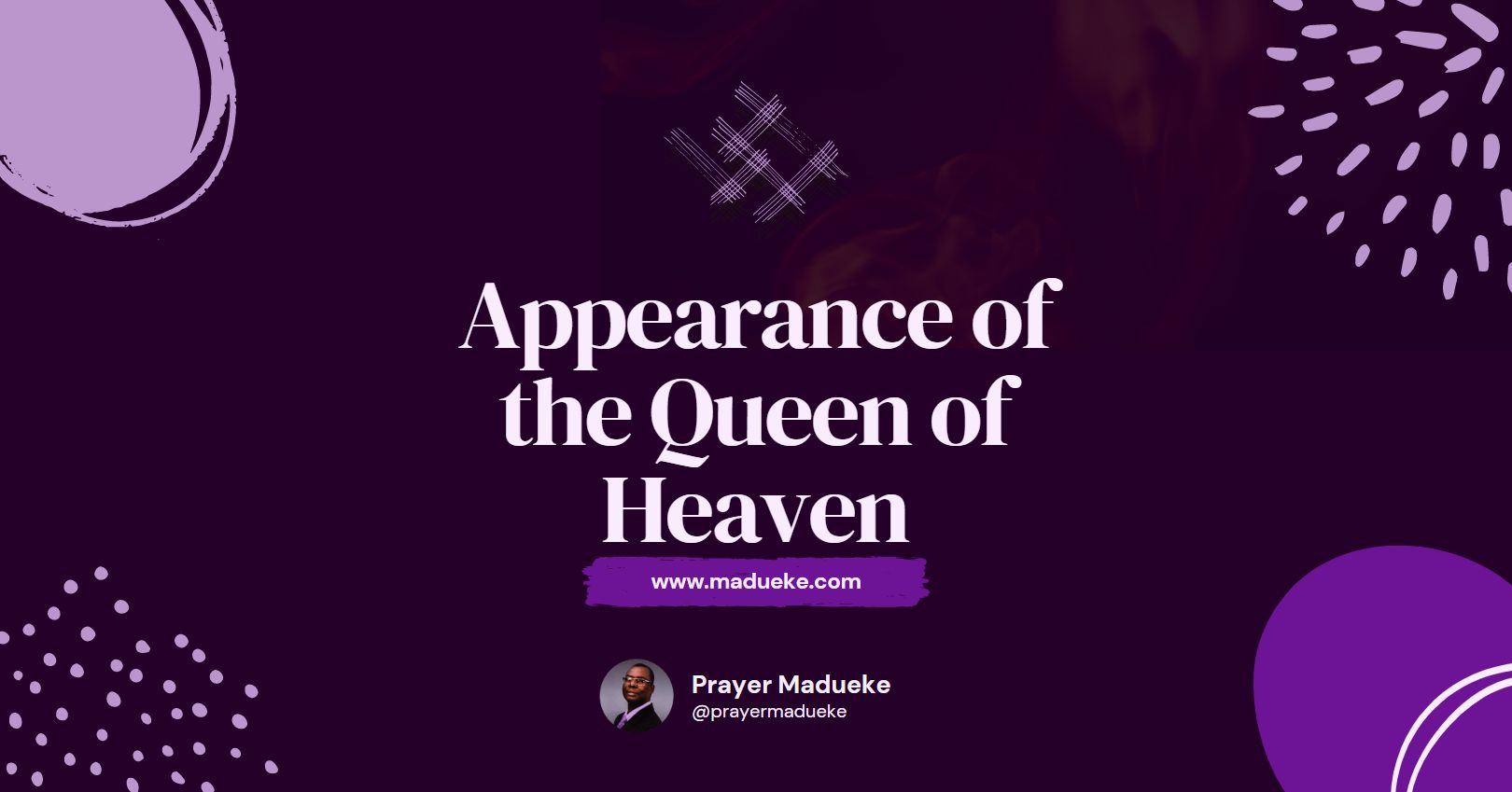 Previously, we can see that the queen of heaven appeared as a great whore, sitting upon many waters which signifies the sea of humanity. The waters where the woman sitteth, (present continuous) is not ordinary water but peoples, multitudes in many nations and tongues who are in covenant with her through idolatry, occultism, bewitchment and manipulations. Idolatry means to forget God; to stray away from God or polluting the name of God. In conclusion, idolatry is putting anything above God. It entails denying God, stooping to worship idols, offering sacrifice to other deities, serving those deities, worshiping the devil, angels, hosts of heaven, or dead people in addition to worshiping idols. The queen of heaven, woman sitting upon many waters has achieved all these in the lives of people who are in covenant with her (fornication), all over the nations of the world- Kings of the world, leaders of every level, the presidency, parliaments, judges in the courts Revelation 17:2, 4 … She puts leaders through fraudulent elections, miscarriage of justices in the courts, law makers, the military and all the law enforcement agents to enforce their decisions. She enriches her agents such as world leaders, the high and lofty and decks them with gold, wealth and precious stones. And she positions them in places of authority to control the inhabitants of the earth. With their influence and their power of wealth they move the inhabitants, multitudes of people in all nations to live contrary to God’s will, purpose and plan. They corrupt people by influencing them with money, supply their every need, initiate them into cults and idolatry with different names and false worship.

So, he carried me away in the spirit into the wilderness: and I saw a woman sit upon a scarlet colored beast, full of names of blasphemy, having seven heads and ten horns. And upon her forehead was a name written, Mystery, Babylon the Great, the Mother of harlots and abominations of the earth.

The golden cup in her hands represent flashy things, the glory of the world, great gifts, positions of authority and all manner of good things here on earth. But before you are allowed to enjoy any of these things, you must be ready pick one, two or more abominable acts inside the golden cup. You must agree to do something, submit your conscience, disobey God, break his commandment, act filthy or enter into an unholy covenant. It may just be to commit a particular sin, act unholy just for once to keep your job, pay your bill, survive, belong to the deceived society, or to keep your business. The woman in charge of marine powers has four names written on her forehead. The first one is ‘MYSTERY’. She is always a senior partner in every covenant relationship and will never give you details; very mysterious and secretive in nature. It could be an ordinary signature for an injection, oral drug, an agreement or an undetailed government demand for a simple thing taken very serious by the government; just a simple confession, an initiation and things that virtually everyone is doing and you must not be left out.

So, he carried me away in the spirit into the wilderness: and I saw a woman sit upon a scarlet colored beast, full of names of blasphemy, having seven heads and ten horns. And I saw the woman drunken with the blood of the saints, and with the blood of the martyrs of Jesus: and when I saw her, I wondered with great admiration. And he saith unto me, the waters which thou sawest, where the whore sitteth, are peoples, and multitudes, and nations, and tongues.

Multitudes from all over the nations, people around you in every family, tribe, race and tongue engage in these acts easily without asking questions. As soon as you give in to this temptation you become separated from God spiritually as all your actions begin to blaspheme God and begin to build “BABYLON”, which is the second name on her forehead. There are actions you can take that will cause you to immediately form a covenant with the marine kingdom and begin constructing Babylon, much like the sons of Noah who once survived the deluge did. Queen of heaven is the sole administrator in the kingdom of Satan; an organizer and the head of the backslidden church. The devil and the satanic kingdom will use her to hand over the church and the government of the world to the Antichrist. She is the mother, the woman that will bring both Christianity and every other religion under fake constitutional freedom. She is pictured as a whore, harlot, prostitute, a woman with whom the kings of the earth as well as leaders all over the world will support and commit fornication with, in order to influence world leader to cause the inhabitant of the earth to accept an ungodly policy. They will combine forces together to fraudulently push away godly leaders in authority from achieving their aim globally. Some leaders may appear weak and fragile, but once they get the support of the kings of the earth, they can sell the world to the Antichrist. That leader that will gather the inhabitant of the earth, as well as the weak, backslidden church and hand them over to the Antichrist is an opposite of a faithful, upright, loyal and true leader who loves God and hates the doctrines of the devil. So, the great whore that sitteth upon many waters (Revelation 17:1) is the false church, a world-wide church, the apostate church who loves the world instead of Christ. This is the nominal church which calls Christ “LORD” without following His teachings. These are fake church leaders or members who persecute the true leaders. They vote the righteous out of power in order to enthrone the queen of heaven, the woman that sits upon many waters, thereby building Babylon the great. What the leaders that possess the spirit of the queen of heaven do is to cause people to come together in a false unity to accept evil policy. They will build Babylon which is another word for evil. Remember that all false religion has their foundation in Babel. In this end time, there will be a culmination and accumulation of false systems of worship under the mystery Babylon

The beast that thou sawest was, and is not; and shall ascend out of the bottomless pit, and go into perdition: and they that dwell on the earth shall wonder, whose names were not written in the book of life from the foundation of the world, when they behold the beast that was, and is not, and yet is. And here is the mind which hath wisdom. The seven heads are seven mountains, on which the woman sitteth. And there are seven kings: five are fallen, and one is, and the other is not yet come; and when he cometh, he must continue a short space. And the beast that was, and is not, even he is the eighth, and is of the seven, and goeth into perdition. And the ten horns which thou sawest are ten kings, which have received no kingdom as yet; but receive power as kings one hour with the beast. These have one mind, and shall give their power and strength unto the beast. And I stood upon the sand of the sea, and saw a beast rise up out of the sea, having seven heads and ten horns, and upon his horns ten crowns, and upon his heads the name of blasphemy.

Prayers Against the Queen of Heaven