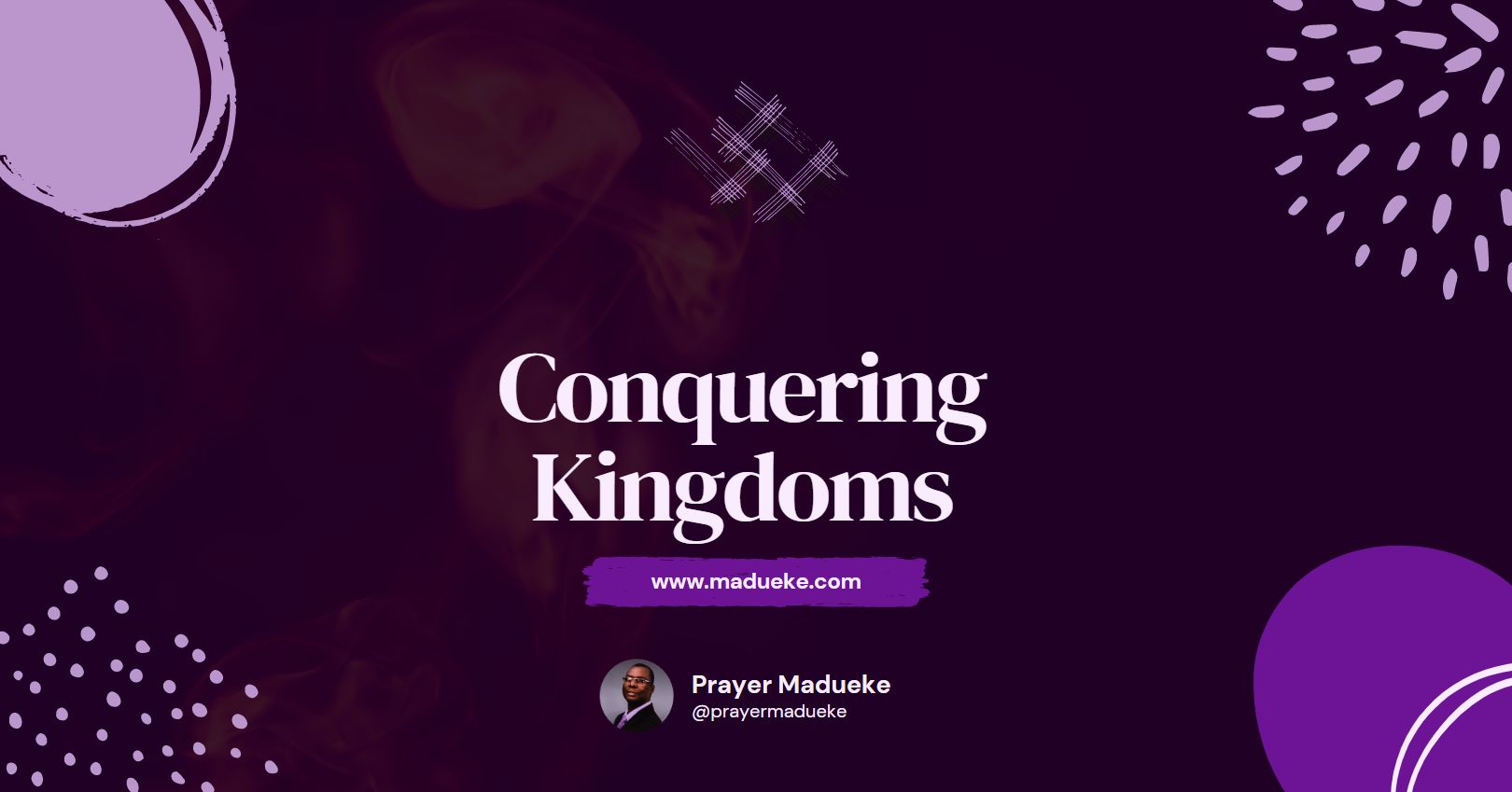 A kingdom is an organized community or major territorial unit having a monarchical form of government headed by a king or queen. A kingdom is an area or sphere in which one holds preeminent position. We have animal kingdom, mineral kingdom and plant kingdom. We have God’s kingdom and the devil’s kingdom. The devil is claiming to be in charge of the kingdom of earth

To really appreciate life, one must liberate the countries the devil has taken over. And in order to overthrow the devil who is already in power, you must please God by faith and pray earnestly; you must be born a devil.

“Or else how can one enter into a strong man’s house, and spoil his goods, except he first bind the strong man? And then he will spoil his house”

The Egyptian Kingdom of Pharaoh’s was an evil kingdom against God’s people. They conspired and placed Pharaoh’s taskmasters against the children of Israel. For so many years, the Israelites were under the bondage of that kingdom, under affliction and murder. Pharaoh, the king of the kingdom once questioned them by saying, who is that God? His magicians were employed to use witchcraft and enchantment against the destinies of the children of God. They were denied of their rights, benefits and entitlements for about four hundred years by the evil kingdom of the Pharaoh of Egypt.

They prayed, fasted and decreed in vain for many years until Moses rose as a man of righteousness, prayer and decree. He got born-again, he knew God. The mercy of God came upon the children of Israel under the deliverance ministry of Moses. They received favor from God in the sight of the Egyptians. The Lord took them away from the bondage of Pharaoh, the king of the kingdom. He crossed them through the uncompromising waters of the red sea and they all marched upon the head of the marine kingdom. They were very happy and they all sang to the glory of God.

“Who is like unto thee, O LORD, among the gods? Who is like thee, glorious in holiness, fearful in praises, doing wonders? Thou stretchedst out thy right hand, the earth swallowed them.   Thou in thy mercy hast led forth the people, which thou hast redeemed: thou hast guided them in thy strength unto thy holy habitation. The people shall hear, and be afraid: sorrow shall take hold on the inhabitants of Palestina. Then the dukes of Edom shall be amazed; the mighty men of Moab, trembling shall take hold upon them; all the inhabitants of Canaan shall melt away. Fear and dread shall fall upon them; by the greatness of thine arm they shall be as still as a stone; till thy people pass over, O LORD, till the people pass over, which thou hast purchased. Thou shalt bring them in, and plant them in the mountain of thine inheritance, in the place, O LORD, which thou hast made for thee to dwell in, in the Sanctuary, O Lord, which thy hands have established.   The LORD shall reign forever and ever.   For the horse of Pharaoh went in with his chariots and with his horsemen into the sea, and the LORD brought again the waters of the sea upon them; but the children of Israel went on dry land in the midst of the sea”

The bitter water they encountered after a three-day journey was promptly and miraculously cured by God. God brought them (manna) bread from heaven and water to drink when they were in need of food. Amalek was a rival king and kingdom that they encountered. Moses raised his hand, and Israel won the battle and intimidated Amalek with the edge of the sword.

“Then came Amalek, and fought with Israel in Rephidim. And Moses said unto Joshua, choose us out men, and go out, fight with Amalek: to morrow I will stand on the top of the hill with the rod of God in mine hand. So Joshua did as Moses had said to him, and fought with Amalek: and Moses, Aaron, and Hur went up to the top of the hill. And it came to pass, when Moses held up his hand, that Israel prevailed: and when he let down his hand, Amalek prevailed.   But Moses’ hands were heavy; and they took a stone, and put it under him, and he sat thereon; and Aaron and Hur stayed up his hands, the one on the one side, and the other on the other side; and his hands were steady until the going down of the sun. And Joshua discomfited Amalek and his people with the edge of the sword.   And the LORD said unto Moses, Write this for a memorial in a book, and rehearse it in the ears of Joshua: for I will utterly put out the remembrance of Amalek from under heaven. And Moses built an altar, and called the name of it Jehovah–nissi: For he said, because the LORD hath sworn that the LORD will have war with Amalek from generation to generation”

Bashan, another king from an evil kingdom confronted them but again, the children of Israel defeated them. They were smitten until none of them was left alive and they possessed their land.

You may have property here and there, companies here and there and as a result, you might begin to commend yourself. As a minister, you may have settled in a big branch, resisting transfer just because of what you have, a big job, good salary and good co-workers and as a result, you have forgotten that there is a better change, opportunity and a better comfort. The same thing happened to a whole nation, the children of Israel. They settled in a wrong place, with a wrong blessing with less divine presence. What you have now which you have already settled for, may just be the beginning of what God wants to give you. People who know where God wants them to be are moving people. They are not settled until they get to the end. The world is a circumference, and everyone is standing in the middle. The people you are facing now may be the wrong people. If God wants you to turn to the other side, don’t insist on your comfort zone.