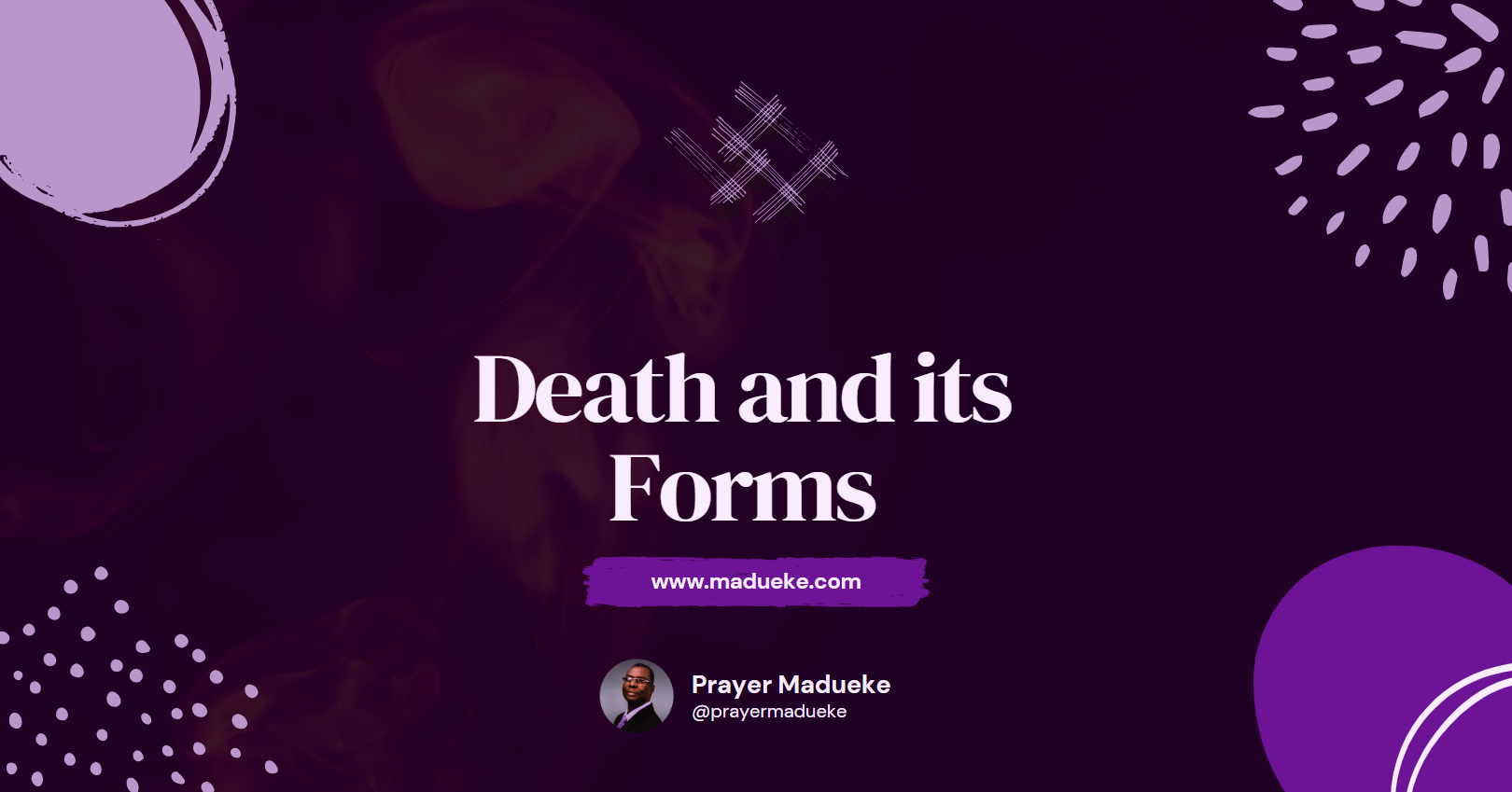 Many people are not aware that this world is filled with evil agents that cause premature deaths. Others do not believe it. Do you know that the earth is filled with more dead people than people alive? Billions of dead people move around on earth without hindrance. Most people you see walking around are nothing but walking corpse. Before men, they are alive but before God, they are dead.

“And you hath he quickened, who were dead in trespasses and sins; Wherein in time past ye walked according to the course of this world, according to the prince of the power of the air, the spirit that now worked in the children of disobedience”

Spiritual death is separation from God while the second death is permanent or eternal separation from God Almighty. God knows people the spirit of premature death possesses. He warned His children not to enter into covenant with such people. Agreement with such people can cause a transfer of such demons into them. I am talking about people who are alive and are walking in the streets but they are condemned criminals before God that can die at anytime because they are under the bondage of the devil. This people may be okay physically looking beautiful and prosperous, but their lives hang in a balance.

When you marry such person, you stand the danger of losing your life and good things that God had prepared for you. At times, demons of premature deaths reside in a family, place or thing. It can also take over an environment or a city.

A malicious entity called grievous death chases humans until it kills them. Its victims are burdened by ghosts of the dead, visitors from cemeteries, and heavy yokes. It causes these folks great misery, pain, and loss. With the help of its power from the tombs, it harms them. It is unfathomable that there are so many people in this world who are oppressed by terrible death, which imposes tragic and horrible events upon them. Anything they touch perishes quickly.

Grievous death does not always kill the principal person involved. Instead, it kills every good thing around the person and leaves the person alive to suffer without help. This kind of death is always ready to kill every good thing the victim initiates. This means that any project or activity the victim would initiate on earth would die a grievous death. None of the victim’s projects would be allowed to reach the completion stage. The victim suffers alone and bears the cost of his losses alone without people’s concern or care. It means that whenever the person enters into trouble or is in need of help, nobody would have pity for him.

Death would encircle the person’s life. Though he remains alive physically, every good thing will desert his life. This is the kind of persons that people forget or avoid while they still live, as if they are dung upon the face of the earth. Their presence irritates people as rejection and hatred characterize their lives on earth. Every good thing avoids such people. Devil fights, pursues and keeps them in famine and destitute of every good thing. People would use their services to make much gain and later dump them.

“And it came to pass, as we went to prayer, a certain damsel possessed with a spirit of divination met us, which brought her masters much gain by soothsaying: The same followed Paul and us, and cried, saying, These men are the servants of the most high God, which show unto us the way of salvation. And this did her many days. However, Paul, being grieved, turned and said to the spirit, I command thee in the name of Jesus Christ to come out of her. In addition, he came out the same hour. And when her masters saw that the hope of their gains was gone, they caught Paul and Silas, and drew them into the marketplace unto the rulers”

Some individuals have made a covenant with the devil. They are given the ability to cause people to die too soon. When they are helping evil occult grandmasters and gaining a lot from them, some people think they are useful to themselves, their parents, and society.

Some of the worst witchcrafts on earth are witchcrafts of manipulation, ignorance and evil transfer of human efforts. Often, the person that causes your pains, barrenness and marital failures to make gain is very close to you. The rich man used his occult powers to manipulate Lazarus through his desires.  Of a truth, he fed Lazarus all the days of his life with crumbs but his wealth that made him to fare luxuriously came from the manipulated destiny of the poor beggar, Lazarus. That is the mystery of premature death. They can offer you as a sacrifice in an evil altar but physically you will be alive to cause others to make gains. That is another form of premature death.