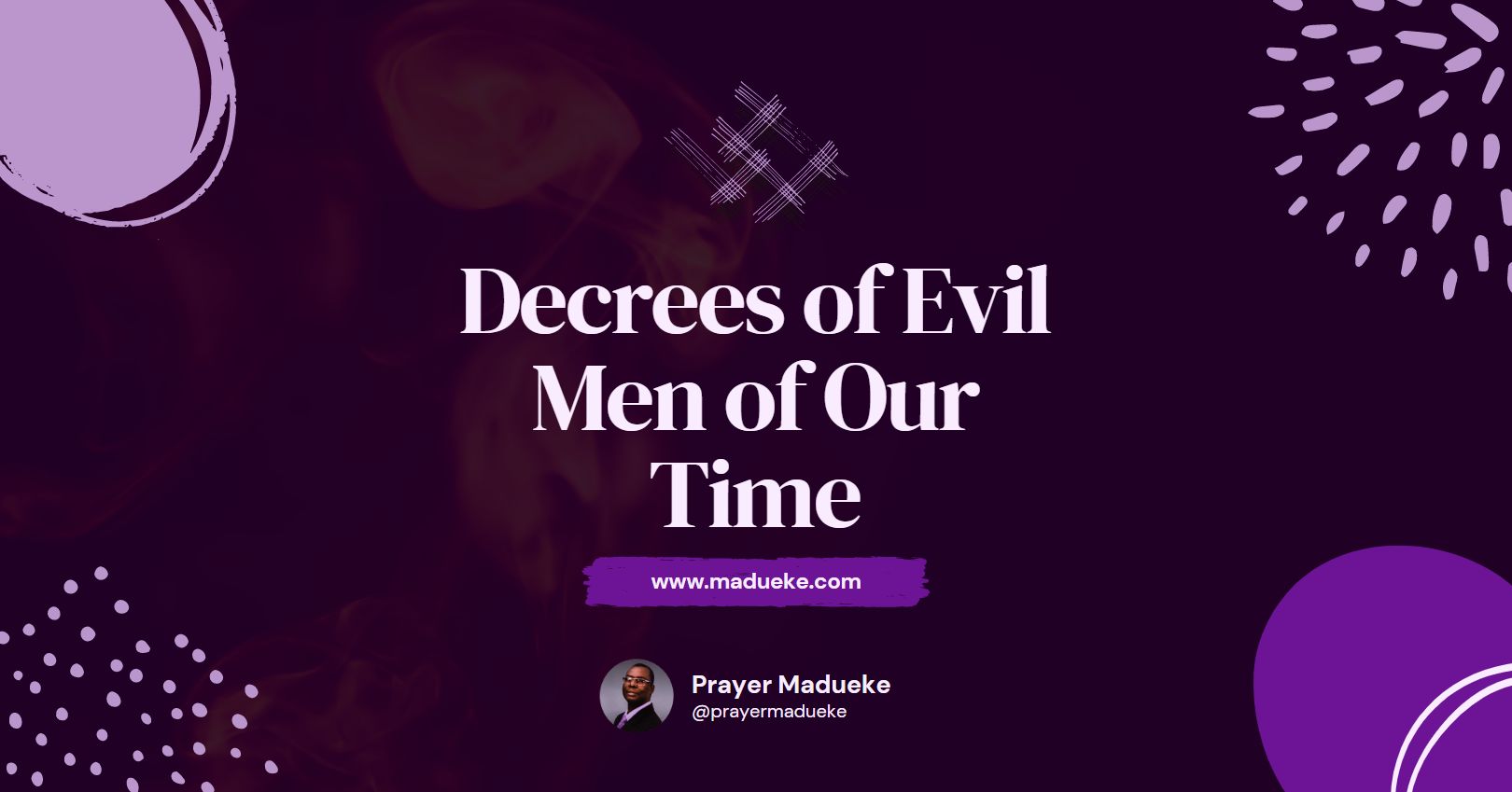 “Woe unto them that decree unrighteous decrees, and that write grievousness which they have prescribed; To turn aside the needy from judgment, and to take away the right from the poor of my people, that widows may be their prey, and that they may rob the fatherless! And what will ye do in the day of visitation, and in the desolation which shall come from far? to whom will ye flee for help? and where will ye leave your glory?”

One of the most absurd stories I have ever heard was about a very rich man in Africa. He was said to be richer than even his own country. His businesses spanned across the continents of the world. Shortly before he became so rich, it was said that he engaged some mallams and ritualists in a business of evil decreeing. One of his employed mallams had to travel to the middle of the sea with a flying boat every 2:00am. He was to perform a sacrifice, accompanied with evil and dangerous decrees at the center of the sea. No one alive is expected to know, even the mallams’ families. The mallams had to travel in small groups. Their job was to offer a ram at mid nights and make incantations of decrees till morning.

While other mallams chanted, the senior mallam carried out sacrifices at the centre of the sea. There, he was expected to have a direct contact with marine powers. These sacrifices went on for 180 days, and afterwards, that particular man became extremely rich. In fact, he became a small god and grand master of the occult. He rose above all mallams who were his masters earlier.  His words became decrees. He employed so many experts, who decreed day and night and communicated with demons on his behalf.

Story has it that recently, he imported a group of mallams from another country to decree certain things for him. These mallams were locked up in a particular place. They were not expected to come out of the house for forty days. They made a suicidal vow never to see the sun, moon or stars for those forty days and nights. So they were locked up so they would not see or talk to any human until the appointed time. However, it was agreed that the day they would come out, under the anointing of devil, they would immediately address the moon, sun, stars and other elementary powers. And so, these foreign mallams went into the underworld with full assurance that once they come out, they would decree anything and it would happen.

Well, that was their faith. But their faith was evil and was intended for evil purposes. But the truth is that if they locked in to what they believed, it would definitely work for them. Evil people go to the extremes when it comes to paying high prices for what they wanted. How could believers not be ready to pay the price of confronting these evil decrees too? In fact, believers, who cannot pay required prices in passing decrees to confront evil decrees, are bound to live under the decree of evil people.

“And when the king of Moab saw that the battle was too sore for him, he took with him seven hundred men that drew swords, to break through even unto the king of Edom: but they could not. Then he took his eldest son that should have reigned in his stead, and offered him for a burnt offering upon the wall. And there was great indignation against Israel: and they departed from him, and returned to their own land”

Even in the midst of all these, the Moabites refused to give up. They kept on fighting. But when the king of Moab saw that the battle would be lost completely, he took seven hundred men that drew swords to break through but he could not. Thereafter, he took his eldest son that would reign in his stead and offered him for a burnt offering. They stood their grounds and made some dangerous decrees with the blood of the young man. On Israel’s side, none was willing to rise up to the challenge and revoke those evil dangerous decrees made with blood, and God was disappointed. The original purpose of God was to deal with the Moabites, but the children of Israel were not ready to confront their evil decrees.

Evil decrees of Moabites, together with the blood of their king’s son, brought great indignation against Israel and they could not continue with the battle.  They departed and returned to their own land. The world is filled with dangerous decrees, whether you believe it or not, and most of these decrees affect believers greatly. Unfortunately, those believers are not fighting back to save their situations due to lack of spiritual agility. Meanwhile; as believers, we ought to rise and courageously work out our salvation.