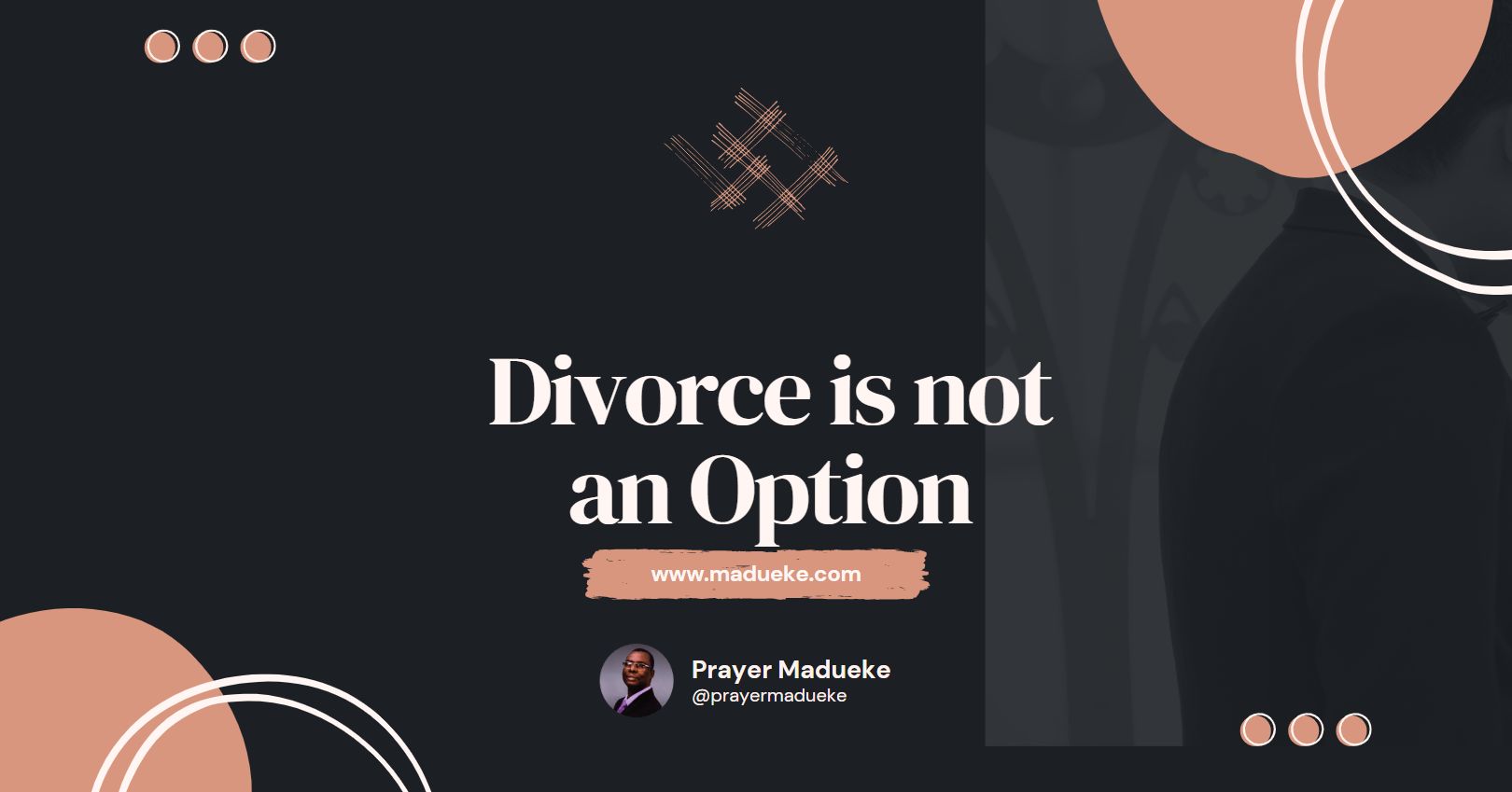 Divorce has often been the topic of debates across the world. However, we know that the Scripture was clear in its position on divorce. The Scriptures clearly revealed that divorce is not the perfect will of God, therefore, God forbids divorce. This generation needs the intervention of God to save countless marriages from divorce and its devastating effects.

In His sermon on the mount, Jesus preached against divorce.

“And I say unto you, Whosoever shall put away his wife, except it be for fornication, and shall marry another, committeth adultery: and whoso marrieth her which is put away doth commit adultery”

Jesus spoke with authority as one who came to correct misconceptions about the Law of Moses. In those days in Israel, young women were bound by law to remain virgins until marriage, otherwise, they are stoned to death.

“They say unto him, Master, this woman was taken in adultery, in the very act.  Now Moses in the law commanded us, that such should be stoned: but what sayest thou?”

“If a man be found lying with a woman married to an husband, then they shall both of them die, both the man that lay with the woman, and the woman: so shalt thou put away evil from Israel”

Traditionally, after wedding ceremony, young virgins usually accompanied the bride to her husband’s house. The man and his bride would go to bed with a piece of cloth received from the father of the bride. If the man finds his bride a virgin, he cleans her blood with the white cloth and hands it to young virgins who waited upon them.

With joy, these virgins would sing and dance until they return to the bride’s father and give him the stained cloth as a token of her daughter’s virginity. In so doing, the man cannot divorce his wife forever. However, if he divorces her, the father would take the stained cloth to court as evidence. She would remain under the care of the man all her life and he cannot divorce or maltreat her because she is a daughter of Zion.

“When a man hath taken a wife, and married her, and it come to pass that she find no favors in his eyes, because he hath found some uncleanness in her: then let him write her a bill of divorcement, and give it in her hand, and send her out of his house”

When a man finds out that his bride is not a virgin, he surrenders her to be stoned to death. However, if he loves the bride that was deflowered, he can retain her as his wife. Nevertheless, he could still divorce her anytime because she committed fornication. That was the case with Mary and Joseph before the angel visited Joseph.

“Now the birth of Jesus Christ was on this wise: When as his mother Mary was espoused to Joseph, before they came together, she was found with child of the Holy Ghost. Then Joseph her husband, being a just man, and not willing to make her a public example, was minded to put her away privily. But while he thought on these things, behold, the angel of the Lord appeared unto him in a dream, saying, Joseph, thou son of David, fear not to take unto thee Mary thy wife: for that which is conceived in her is of the Holy Ghost. And she shall bring forth a son, and thou shalt call his name JESUS: for he shall save his people from their sins. Now all this was done, that it might be fulfilled which was spoken of the Lord by the prophet, saying, Behold, a virgin shall be with child, and shall bring forth a son, and they shall call his name Emmanuel, which being interpreted is, God with us. Then Joseph being raised from sleep did as the angel of the Lord had bidden him, and took unto him his wife”

Joseph found out that Mary, who was engaged to him, was pregnant. However, Joseph was a just man and was not willing to make the matter public. When he decided to put Mary away privately, an angel of God intervened. The angel informed Joseph that Mary’s conception has nothing to do with sin of fornication.

Until Jesus Christ came to the world, marriage, separation and divorce were highly contested and controversial issues. However, Christ brought clarity to these issues. That is why intending couples are advised to seriously seek the face of God before stepping into marriage to avoid the heartbreaking issues of divorce from springing up.