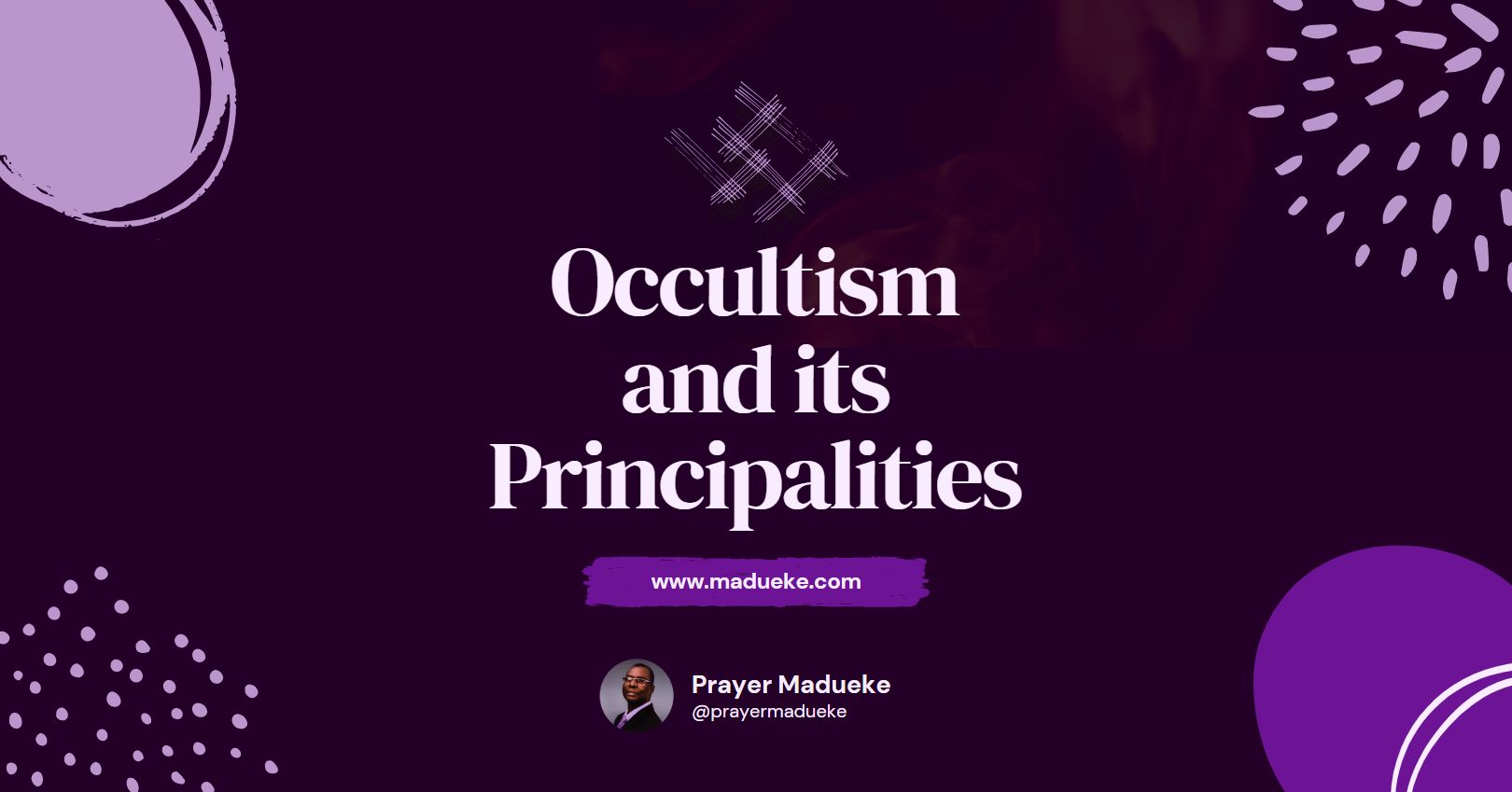 Occultism is satanic operation shut off from the view or exposure to the public. It is more or less unrevealed activities of the devil to none members of an occult groups. Only people in covenant with Satan practice occultism, which revolves around wicked operations not easily apprehended or understood by none members. Occultism is abstruse, mysterious, and concealed from public consumption. The operations of the dark world are not detectable by clinical methods in most cases. However, in the right context, one could contend that occultism is nothing more than a covert association of individuals who are obligated to enact or carry out an agenda, typically a demonic agenda of dominance and subjection in contrast to the divine mandate God gave to Adam and Eve.

Occultism is the use of supernatural abilities or knowledge of the devil for bad purposes. It is a bad deed or the result of supernatural or super-normal power intended to destroy people and property. An occultist looks to demonic spirits for strength, knowledge, or assistance. They use charms, enchantments, divination, and sacrifices to the devil.

subdue it: and have dominion over the fish of the sea, and over the fowl of the air, and over every living thing that moveth upon the earth

The core problem is inspired by Lucifer and his legion of demons, some humans want more. They want total subjugation and dominion over other fellow humans and to rule completely in the affairs of all men they look upon as ordinary mortals that are less enlightened. This is contrary to divine charge God gave to man to subdue and have dominion over all creatures. However, some humans want the mandate extended to humans they deem less enlightened and ordinary and here lies the secret motivation of occultism. The main spirit driving occultism is Satan. Remember how Satan tricked Eve into believing that if she ate the forbidden fruit, she would die?

…’Ye shall not surely die. For God doth know that in the day you eat thereof, then your eyes shall be opened, and ye shall be as gods, knowing good and evil’

Would you expect that after the fall of man, devil would leave man alone? Wrong! Lucifer has long since built strongholds and many abodes in the hearts of men. He controls men at will. Those that worship him converge in secret places. They practice witchcraft and spirit worship. They recruit as many men and women as possible. They expansionist theory is never-ending.

Occultism is widespread across the world with so many dimensions and orders, many of which are known and many of which are unknown. The imposition of a code of secrecy and the death penalties associated with disobeying the cult’s rules are two characteristics shared by all occult organisations. It is almost impossible to agree whether there is anything like good occult group as many religious establishments, in the past and present, have been at the forefront of occultism all in the name of worshiping one deity or the other. There is a thin line between good and evil. But truth is, good will never be evil and evil will never be good. Light will never become darkness, likewise, darkness will never become light. It is (and will always be) either one of the two, light or darkness, good or evil.

Satan, the antichrist, is the head of occultism and demonic intelligence. The devil is presently using occultism to destroy the world. It is dangerous to combine spiritual intelligence with occult practices. No nation will succeed or remain progressive with occultism, which makes people selfish, wicked, unreasonable, brutal, and inconsiderate. Occult people are cruel, suicidal, and mad when disappointed in times of failure, as was the case in Babylon.

“For this cause the king was angry and very furious, and commanded to destroy all the wise men of Babylon. And the decree went forth that the wise men should be slain; and they sought Daniel and his fellows to be slain”

Knowledge without true relationship with God is against the spirit of nation building. No one can belong to the occult and still maintain a relationship with God because with time, occultism destroys genuine knowledge. Real knowledge and intelligence come from God, and when benefactors are unwilling to surrender their lives to God, their knowledge and intelligence will suffer corruption and brought to vanity. While Satan is the father of occultism and witchcraft, queen of heaven is the mother of witchcraft.

Previous article
Guarding your Pregnancy
Next article
The Superiority of Man