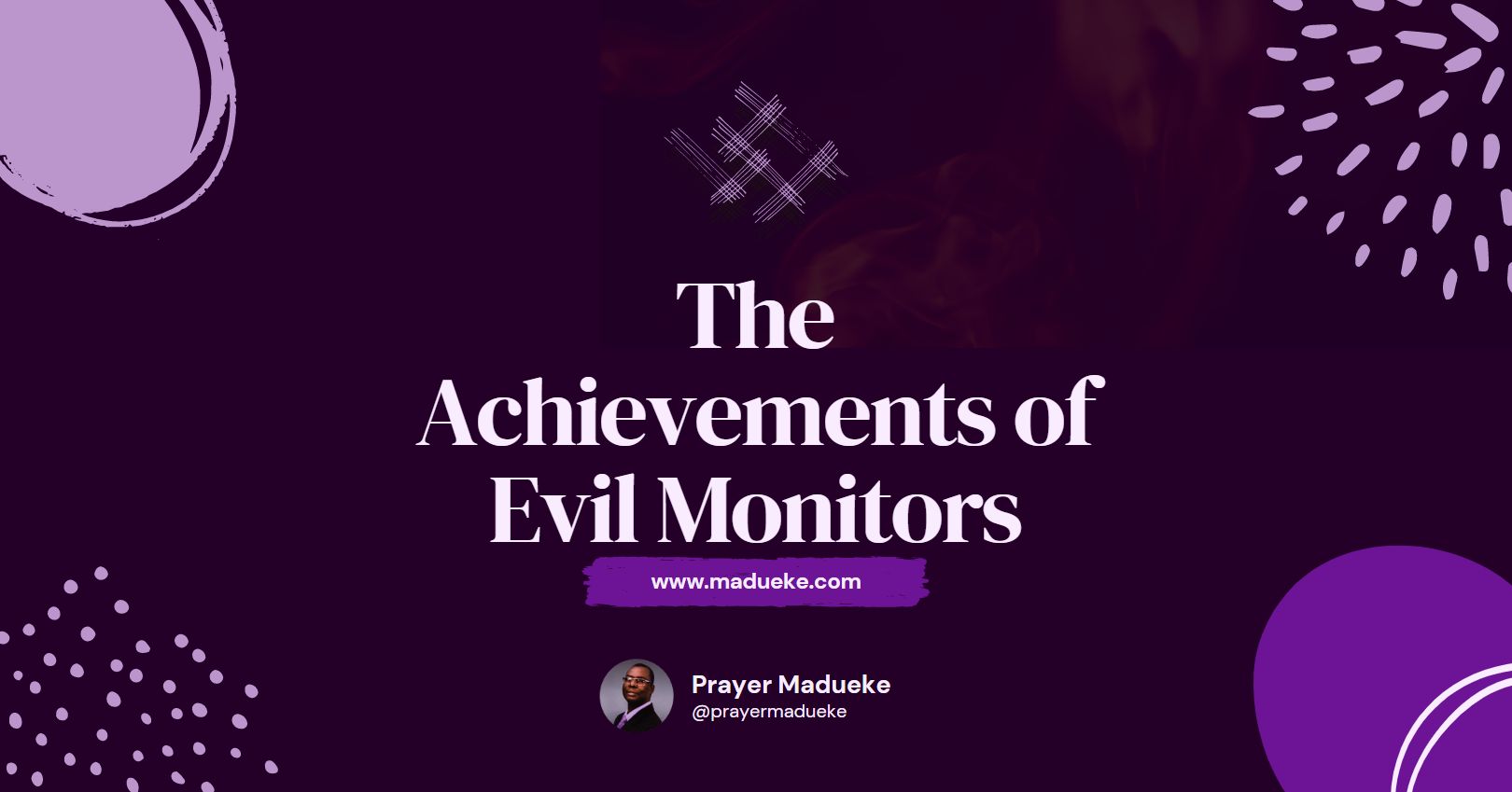 Only the most heinously wicked sinners who have made a bargain with the devil to steal, kill, ruin, and waste great destined individuals are granted the talents of monitoring spirits. They are sought after by other sinners who want to know how to find out people’s fates and waste them. When the descendants of Israel departed from Egypt, that was the way of life for those who resided in the Promised Land. Similar to how you are being warned right now, God forbade the children of Israel from imitating their corrupt practices (Deuteronomy 18:9-12). Every devil commissioned agent, witch doctors, false ministers, fake prophets, diviners, enchanters, witches, wizards, charmers, necromancers, people who relate with familiar spirits, all sinners and those patronizing them are classified as wicked.

The wicked watcheth the righteous and seeketh to slay him.  The Lord will not leave him in his hand, nor condemn him when he is judged.

These evil men and women have changed divine order, converted signs to ensigns, lifted up axes upon thick tress, broke down the carved works of God. And with their axes and occult hammers destroyed great destined men and women in the society in every home, communities, cities, nations and in the body of Christ. They have cast strange fires in human bodies, into the holy sanctuary, pulled many great men down to the ground and invaded every divinely established organization.

Thine enemies roar in the midst of thy congregations; they set up their ensigns for signs.  A man was famous according as he had lifted up axes upon the thick trees. But now they break down the carved work thereof at once with axes and hammers.  They have cast fire into thy sanctuary, they have defiled by casting down the dwelling place of thy name to the ground.  They said in their hearts, let us destroy them together: they have burned up all the synagogues of God in the land.  We see not our signs: there is no more any prophet: neither is there among us any that knoweth how long.

On daily bases, they are watching, monitoring you, searching diligently to discover the secrets behind your joy, progress, happiness and promotion to destroy them. Even as I am talking now, they are raising altars, especially the altars of iniquity to cause you to commit iniquity, tell lies or commit any sin. Once they bring you down through any small or big sin, the door of your life is opened for satanic attacks. In their search, through evil monitoring altar or mirror, they can discover your inward thoughts and use it against you.

They search out iniquities; they accomplish a diligent search: both the inward thought of every one of them, and the heart, is deep.

Sacrifices in a cross road altar, four corner road, gate altar, tree altar, forest altar, image altar, mobile altars, human altars, water spirit altars, astral altars, family shrine altars and worst; altars of sin can be used to open the door of any life, thing or a place for an attack. Elaborated messages about evil altars can be found in my two books titled, “A jump from evil altars” and “when evil altars are multiplied”. Returning to our sub-topic, “Achievements of monitoring spirits”; monitoring spirits monitored Adam and Eve for a very long time in the garden of Eden and discovered the weakness of Eve and the time to strike. In the absence of Adam, the devil entered the garden through the door of Adam’s absence and moved Eve against God. In a moment of time, through an animal altar called serpent, he presented the forbidden fruit as a harmless fruit and good for human body. Through the eye gate, Eve looked at what God had forbidden, stretched her hand, touched the fruit, plucked it out from the tree and desired what God prohibited. She ate the fruit, deceived her husband to follow suit and stripped them naked with a curse (Genesis 3:1-24).

Cain joined the family who fell into evil monitoring demons through an open door of evil sacrifice, anger and murder.

Esau, the twin brother to Jacob was manipulated to despise his birth right which he fought for nine months from the womb to the time of labor.

Reuben, the first child of Jacob failed to the appeals of evil monitoring machine of sin when he failed to control his immoral desires by having a carnal knowledge of his father’s wife Bilhah.

Reuben, thou art my firstborn, my might, and the beginning of my strength, the excellency of dignity, and the excellency of power: Unstable as water, thou shalt not excel; because thou wentest up to thy father’s bed; then defiledst thou it: he went up to my couch.

Altars of sin can keep you in sin even at the point of death in the presence of Christ, the savior of the world, if you refuse to repent now. One of the thieves by the cross of Christ instead of repentance opened his mouth and insulted Him. You may be a lawyer, medical personnel, politician like Pilate but if you fail to repent of all your sins, confess them and forsake them, the altars of sin will disgrace you.