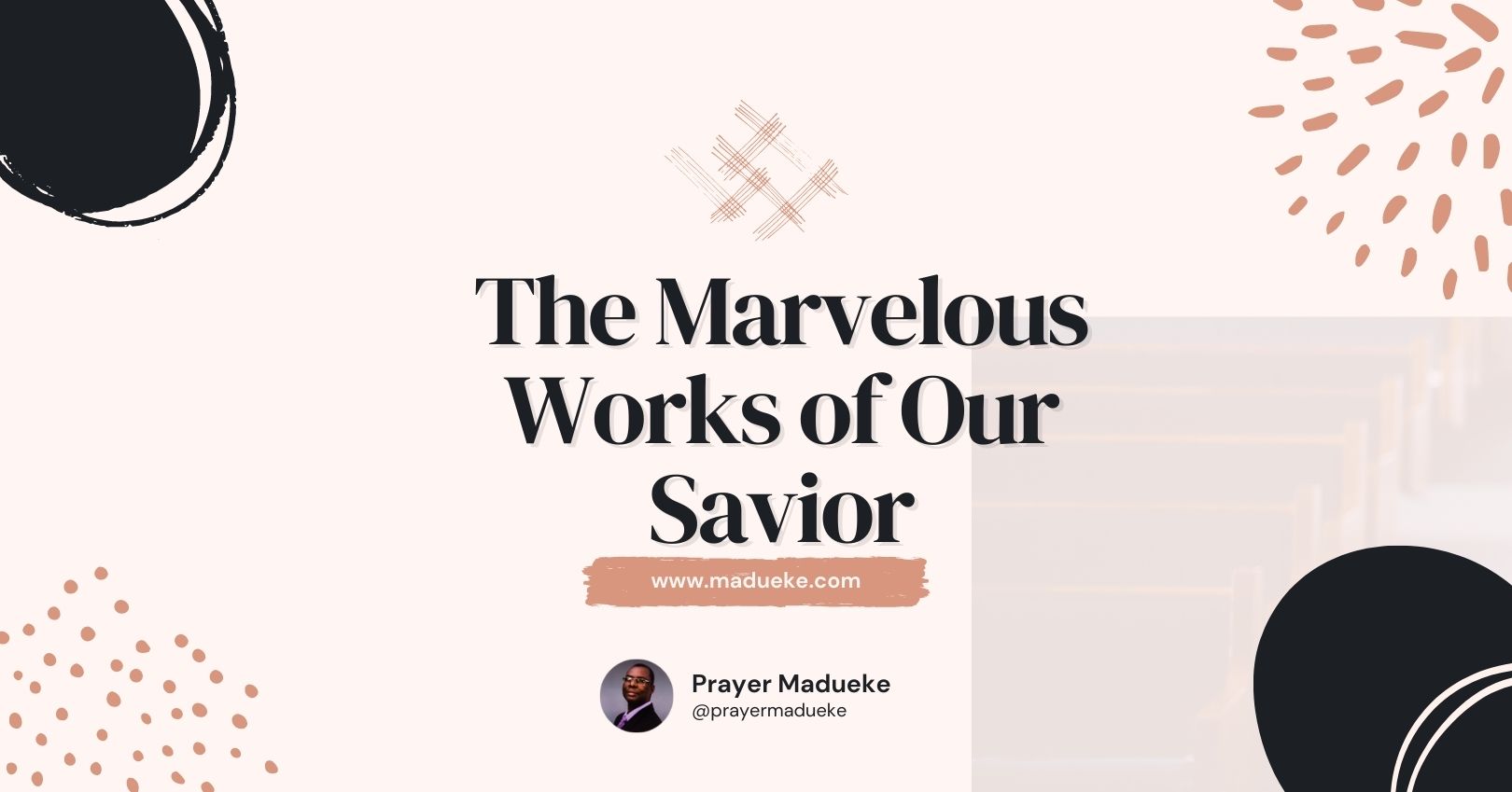 Jesus Christ gave His life and all of His strength to help humanity. He healed everyone under the devil’s yoke by using His authority and the Holy Ghost’s anointing. He didn’t sit around and didn’t keep His authority or anointing to Himself. He also didn’t sell them. Jesus carried out his good deeds.

“How God anointed Jesus of Nazareth with the Holy Ghost and with power: who went about doing good, and healing all that were oppressed of the devil; for God was with him”

Jesus did not relent in saving people from bondage at some point. He healed and delivered people all the way. The day He went to Jericho, there was a certain man who was blind. This man was sitting by the roadside. The devil closed his eyes and limited his life by turning him into a beggar. However, when this blind man heard an unusual noise and multitudes of people passing by the roadside, he asked people what was happening. They told him that Jesus of Nazareth was passing by. He lifted up his voice and cried for mercy.

“And it came to pass, that as he was come nigh unto Jericho, a certain blind man sat by the way side begging: And hearing the multitude pass by, he asked what it meant. And they told him, that Jesus of Nazareth passeth by. And he cried, saying, Jesus, thou Son of David, have mercy on me. And they which went before rebuked him, that he should hold his peace: but he cried so much the more, Thou Son of David, have mercy on me. And Jesus stood, and commanded him to be brought unto him: and when he was come near, he asked him,   Saying, What wilt thou that I shall do unto thee? And he said, Lord, that I may receive my sight. And Jesus said unto him, Receive thy sight: thy faith hath saved thee.   And immediately he received his sight, and followed him, glorifying God: and all the people, when they saw it, gave praise unto God”

Jesus was drawn to his scream of trust and opened his eyes. Ten lepers were the next group of people he encountered. The ten lepers cried out to Jesus from a distance, and when He heard their need, He gave them a straightforward command: “Go present yourselves unto the priests.” They were made whole as they followed orders. What a wonderful miracle.

“And it came to pass, as he went to Jerusalem that he passed through the midst of Samaria and Galilee. And as he entered into a certain village, there met him ten men that were lepers, which stood afar off: And they lifted up their voices, and said, Jesus, Master, have mercy on us. And when he saw them, he said unto them, Go shew yourselves unto the priests. And it came to pass, that, as they went, they were cleansed. And one of them, when he saw that he was healed, turned back, and with a loud voice glorified God, And fell down on his face at his feet, giving him thanks: and he was a Samaritan. And Jesus answering said, Were there not ten cleansed? But where are the nine? There are not found that returned to give glory to God, save this stranger. And he said unto him, Arise, go thy way: thy faith hath made thee whole”

When you lift up your voice and cry to Jesus for mercy, you will receive mercy. If you will obey Christ’s instruction by keeping His Word, then all your problems will end.

“And it came to pass, as he went into the house of one of the chief Pharisees to eat bread on the Sabbath day, that they watched him. And, behold, there was a certain man before him which had the dropsy. And Jesus answering spake unto the lawyers and Pharisees, saying, Is it lawful to heal on the Sabbath day? And they held their peace. And he took him, and healed him, and let him go”

Jesus Christ does not discriminate. He did not have favorites. He went to the house of the chief of the Pharisees and ate. There, He met a man with dropsy who did not even know his right to receive healing. Though this man was ignorant, Jesus took him and healed him. Jesus Christ ministered to the rich, the poor and the beggars. He is ready to help you if you cry unto Him. He healed a man with an unclean spirit. When the demons inside the man wanted to negotiate, Christ rebuked them and commanded them to hold their peace and come out and they did.

“And in the synagogue there was a man, which had a spirit of an unclean devil, and cried out with a loud voice, Saying, Let us alone; what have we to do with thee, thou Jesus of Nazareth? Art thou come to destroy us? I know thee who thou art; the Holy One of God. And Jesus rebuked him, saying, Hold thy peace, and come out of him. And when the devil had thrown him in the midst, he came out of him, and hurt him not. And they were all amazed, and spake among themselves, saying, What a word is this! For with authority and power he commandeth the unclean spirits, and they come out. And the fame of him went out into every place of the country round about”

The man ran into the synagogue, but the unclean spirits followed him to torment him right before the ministers of the gospel, the priests. When the demons saw Jesus, they cried out to be left alone but Christ cast them out. Jesus Christ really dealt with the devil. He rebuked and destroyed the spirit of fever, laid hands on many people and healed them. He cast out the spirit of fear, forgave many of their sins, made many that were lame to walk, healed diseases, fed the hungry, and loosed many that were bound for many years.

“And, behold, there was a woman which had a spirit of infirmity eighteen years, and was bowed together, and could in no wise lift up herself. And when Jesus saw her, he called her to him, and said unto her, Woman, thou art loosed from thine infirmity. And he laid his hands on her: and immediately she was made straight, and glorified God”

He delivered possessed people, restored withered hands, cast out evil spirits that grieved people, healed the deaf and dumb and delivered a lunatic from wicked legions. He paid tax for Himself and his followers. He destroyed many plagues, calmed raging storms, loosed people from evil chains, delivered those who were at the point of death and healed a woman with an issue of blood.

“And a certain woman, which had an issue of blood twelve years, And had suffered many things of many physicians, and had spent all that she had, and was nothing bettered, but rather grew worse, When she had heard of Jesus, came in the press behind, and touched his garment. For she said, If I may touch but his clothes, I shall be whole. And straightway the fountain of her blood was dried up; and she felt in her body that she was healed of that plague. And Jesus, immediately knowing in himself that virtue had gone out of him, turned him about in the press, and said, Who touched my clothes? And his disciples said unto him, Thou seest the multitude thronging thee, and sayest thou, Who touched me? And he looked round about to see her that had done this thing. But the woman fearing and trembling, knowing what was done in her, came and fell down before him, and told him all the truth. And he said unto her, Daughter, thy faith hath made thee whole; go in peace, and be whole of thy plague”

In addition, Jesus delivered those who were disabled by demons. He opened ears that were deaf, terminated demons that attacked people with impediment of speeches, and delivered those that were afflicted with epilepsy. Jesus Christ also empowered His disciples to deal with the devil and to destroy his works.