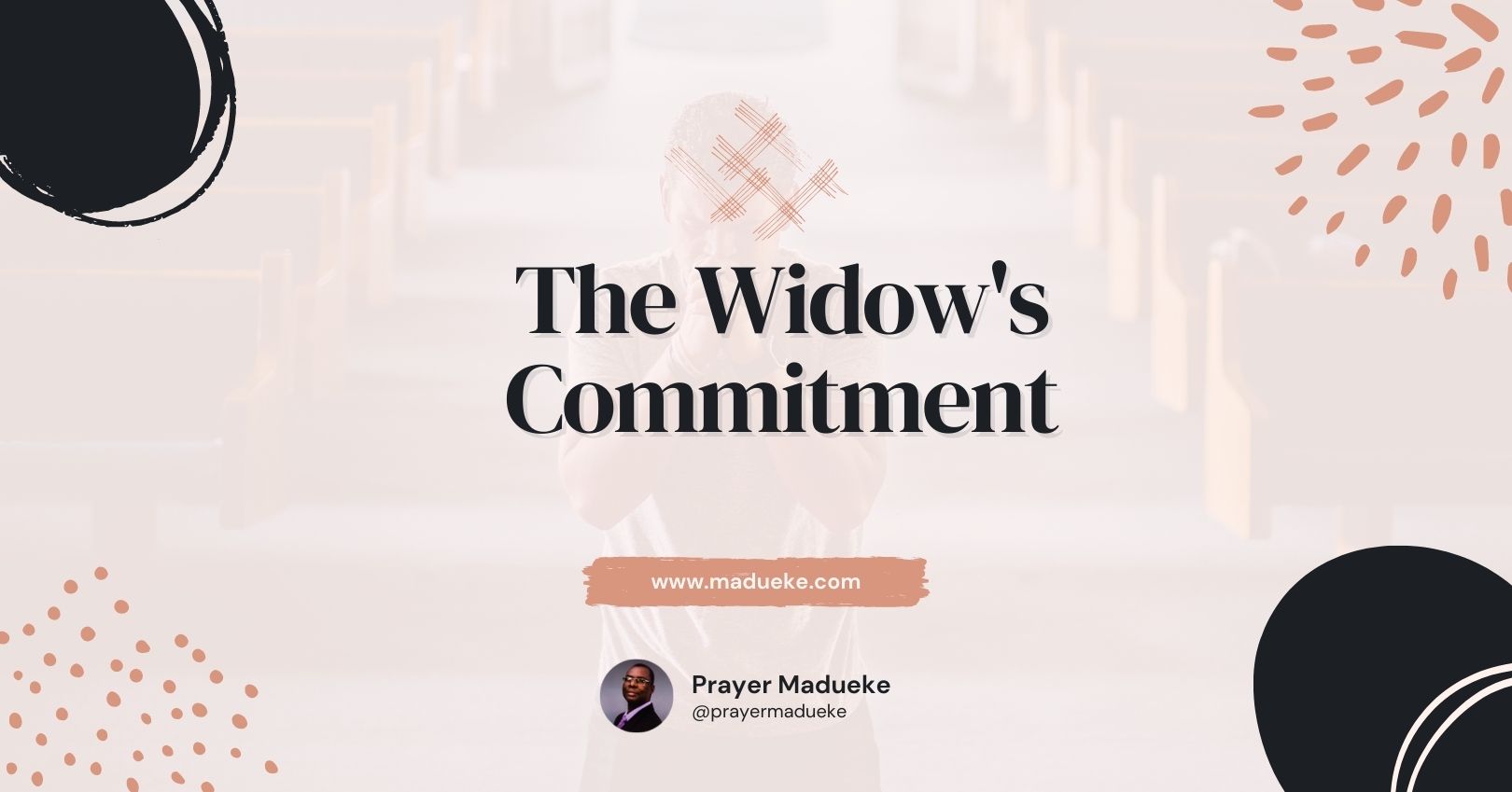 While no one can question God for calling any of us to glory, it is very important that a widow or widower commit his or her life in the hands of God. God truly comforts the heart and provides relief. Therefore, it cannot be better elsewhere.

It is not possible for one to be committed to God without being born-again. To be a born-again is the beginning of every success and the beginning of a true Christian or spiritual life. Human successes on earth depend on seeds we planted. This is a godly principle.

“And Jesus sat over against the treasury, and beheld how the people cast money into the treasury: and many that were rich cast in much. And there came a certain poor widow, and she threw in two mites, which make a farthing. And he called unto him his disciples, and saith unto them, Verily I say unto you, That this poor widow hath cast more in, than all they which have cast into the treasury: For all they did cast in of their abundance; but she of her want did cast in all that she had, even all her living”

The Lord’s eyes are open to all that people do on earth. God wants every person to plant excellent seeds in accordance with what they have been given. Jesus keeps an eye on everything you do to determine your level of dedication. Widows of all income levels are expected to support the spread of the gospel. Jesus demands a bit from you, regardless of how little you have. It is expected of widows who have not yet experienced rebirth to do so, just like it is demanded of every other true believer on earth.

“And there was one Anna, a prophetess, the daughter of Phanuel, of the tribe of Aser: she was of a great age, and had lived with an husband seven years from her virginity; And she was a widow of about fourscore and four years, which departed not from the temple, but served God with fastings and prayers night and day. And she coming in that instant gave thanks likewise unto the Lord, and spake of him to all them that looked for redemption in Jerusalem”

“There was a man of the Pharisees, named Nicodemus, a ruler of the Jews: The same came to Jesus by night, and said unto him, Rabbi, we know that thou art a teacher come from God: for no man can do these miracles that thou doest, except God be with him. Jesus answered and said unto him, Verily, verily, I say unto thee, Except a man be born again, he cannot see the kingdom of God”

Anna was a widow who kept herself pure and holy and God empowered her with gifts of a prophet. She was only married for seven years before her husband died. Though she married as a virgin, she remained a widow for about 84 years as a prophet. She worked for God in the temple, fasting and praying night and day. Eventually, she lived to see Christ whom she prayed for his coming for many years.

Susannah Wesley was a poor woman who invested in her children through prayers and gave the world John and Charles Wesley as fruit of her labor. Dwight L. Moody in his Chicago meeting of October, 1876, told a story to encourage Christian women to pray for the salvation of their loved ones. At one of the meetings at Nashville, during the war, a young man came to him, trembling from head to toe. ‘What is the trouble,’ he asked. “There was a letter I got from my sister and she told me that every night, as the sun goes down, she goes on her knees and prays for me”. This man was brave and had fought many battles. He could stand in front of the canon, yet a simple letter completely distressed him.

At Meurfessbore, a similar incident took place. A young man received a letter from his mother that read, “My dear boy, you do not know how I am burdened for your salvation. Every morning and evening, I go into my closet and pray for you, that you may be led to the cross of Christ. You may die in battle or in the hospitals and O, my son, I want you to become a Christian. I do not know but this might be my last letter to you”.

Later, this lieutenant came to Dwight L. Mood and said, “I have just heard of my mother’s death and I have prayed for forgiveness of my sins.” He gained conversion through his mother’s faith. Although she has gone to glory, her voice was still heard.

Anna was a praying widow and a prophetess of God for 84 years. Her major prayer point was that God would send a redeemer to the world. God honors women that obey His Word.

“1Rebuke not an elder, but entreat him as a father; and the younger men as brethren; The elder women as mothers; the younger as sisters, with all purity.  Honor widows that are widows indeed. But if any widow has children or nephews let them learn first to show piety at home, and to requite their parents: for that is good and acceptable before God. Now she that is a widow indeed, and desolate, trusted in God, and continueth in supplications and prayers night and day. But she that liveth in pleasure is dead while she liveth. Let not a widow be taken into the number under threescore years old, having been the wife of one man”

God is kind to widows. He also honors them. A widow who sleeps around is not a Christian. Widows who end another person’s marriage are immoral because they commit adultery.. A widow that lives in pleasure is spiritually dead.

Previous article
Yokes Beyond the Physical
Next article
The commandment For the Home!