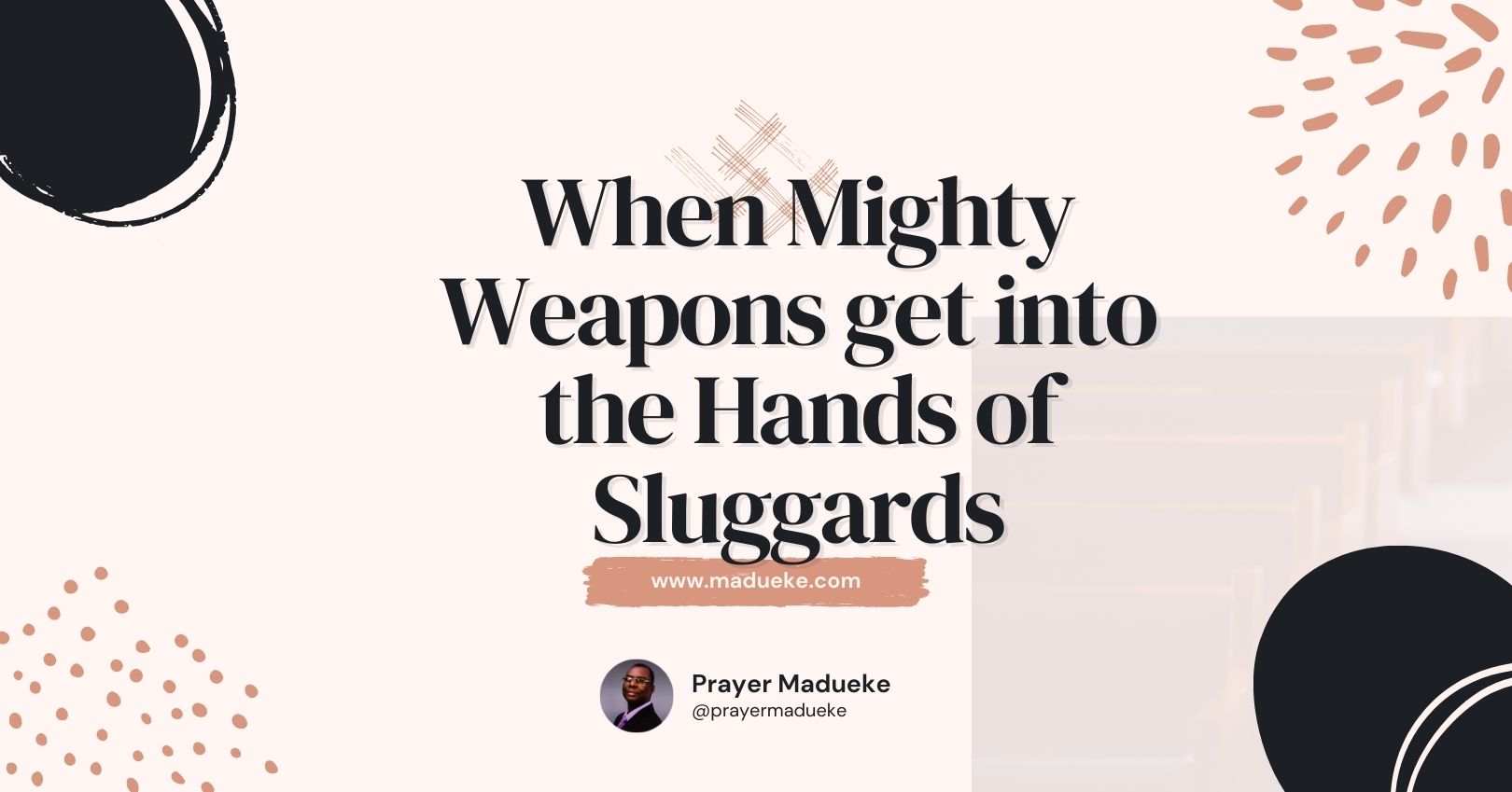 “How long wilt thou sleep, O sluggard? When wilt thou arise out of thy sleep? Yet a little sleep, a little slumber, a little folding of the hands to sleep: So shall thy poverty come as one that travelleth, and thy want as an armed man”

There are some spiritual weapons that have slipped off the hands of most individuals, as a result of their sluggishness or their ignorance to the usage of these spiritual weapons. Looking at the instance of Gehazi from the bible; the sin of Gehazi was very bad but not the worst sin ever committed. Truly, he committed iniquity but God was waiting for him to repent and say: “Lord, I am sorry. Please forgive me.” Instead of repentance, Gehazi chose to tell lies. Gehazi had seen his master and his God pardon greater sins than his. He had seen and heard about God’s great mercy and goodness. He knew God as the Lord God of Abraham, Isaac and Jacob. He knew God as Elohim (the Strong One). He knew him also as Adonai (Master or Lord). These names imply rulership over His creation. Gehazi knew that God had absolute dominion and that in Him is the ability to do all things; yet he died a leper.

Gehazi, the servant of Elisha the man of God, said to himself, “My master was too easy on Naaman, this Aramean, by not accepting from him what he brought. As surely as the Lord lives, I will run after him and get something from him.” So Gehazi hurried after Naaman. When Naaman saw him running toward him, he got down from the chariot to meet him. “Is everything all right?” he asked. “Everything is all right,” Gehazi answered. “My master sent me to say, ‘Two young men from the company of the prophets have just come to me from the hill country of Ephraim. Please give them a talent[a] of silver and two sets of clothing.’” “By all means, take two talents,” said Naaman. He urged Gehazi to accept them, and then tied up the two talents of silver in two bags, with two sets of clothing. He gave them to two of his servants, and they carried them ahead of Gehazi. 2When Gehazi came to the hill, he took the things from the servants and put them away in the house. He sent the men away and they left. When he went in and stood before his master, Elisha asked him, “Where have you been, Gehazi?” “Your servant didn’t go anywhere,” Gehazi answered. But Elisha said to him, “Was not my spirit with you when the man got down from his chariot to meet you? Is this the time to take money or to accept clothes—or olive groves and vineyards, or flocks and herds, or male and female slaves? Naaman’s leprosy will cling to you and to your descendants forever.” Then Gehazi went from Elisha’s presence and his skin was leprous—it had become as white as snow.

When Ahab sinned and humbled himself, the Lord God forgave him. Nevertheless, when Gehazi sinned in the house of God under the leadership of a beloved prophet with a double portion anointing, he simply said amen to the curse placed upon him. Gehazi, instead of using the weapons of humility, true repentance, etc., proudly left the greatest man of his generation. A stranger came and received his healing from leprosy but Gehazi, a member of the commonwealth of Israel, became and remained a leper throughout his life. What a shame that a foundation member of a living church will usher people into the house of God to receive from the Lord while he or she dies with his or her own problems. What a great disappointment that testimonies have departed from old members of the church (2 Kings 5:13-14).

Gehazi should have wept before Elisha and confessed his sin. Ananias should have confessed to Peter. Though Sapphira agreed with her husband earlier, she should have repented. However, she decided to meet her husband in hell fire. What are you waiting for? Would you like to dislike your fathers? Do not be careless with your soul. Repent of your sins and the Lord will heal you and deliver you. Gehazi took the cases of many people who were in bondage to his master, Elisha, but when he was placed under bondage, he could not pray to free himself (2 Kings 4:12-17).

Many believers today are giving the testimonies of what God is doing in their churches and in the lives of other people. They are in charge of testimonies in their Christian group but they themselves have no testimonies. Some people answer “Blessing” (as their name) but the blessings of God are still very far from them. Some answer “Grace” but they do not have enough grace for a single miracle.

God forbid that I will answer “Miracle” as a name without a single miracle in my life. Now, I want you to say that it is now your turn to give testimony (2 Kings 8:4-6). The curse placed on Gehazi was forever and ever but we have a God who can heal and the healing remains forever (2 Kings 5:27). If you see an Israelite today with leprosy, he or she must have come from the seed of Gehazi. That is what we call an evil gate or evil inheritance.

Cain had every chance to become a great man like Abel, but he chose not to take advantage of them. Instead, he used all of his strength to battle both his brother and even God (Genesis 4:3-10). God spent his time explaining to Cain why he wasn’t prosperous, but Cain didn’t pay attention.

We have a very thin line between success and failure. The decision you take in this life matters a lot. The first captain with his fifty soldiers in 2 Kings 1:9-10, failed because he had no respect or regard for the man of God, Elijah. Your manner of approach to persons and God can build or destroy you. The captain addressed the prophet (Elijah) thus: “Thou man of God, the king hath said, come down.” The second captain said to Elijah: “O man of God, thus hath the king said, comedown quickly.” The third captain of fifty went and fell on his knees before Elijah and pleaded with him; “O man of God, I pray thee, let my life, and the lives of these unfaithful servants be precious in thy sight…” No matter your position, God is God and his standard is unchangeable.