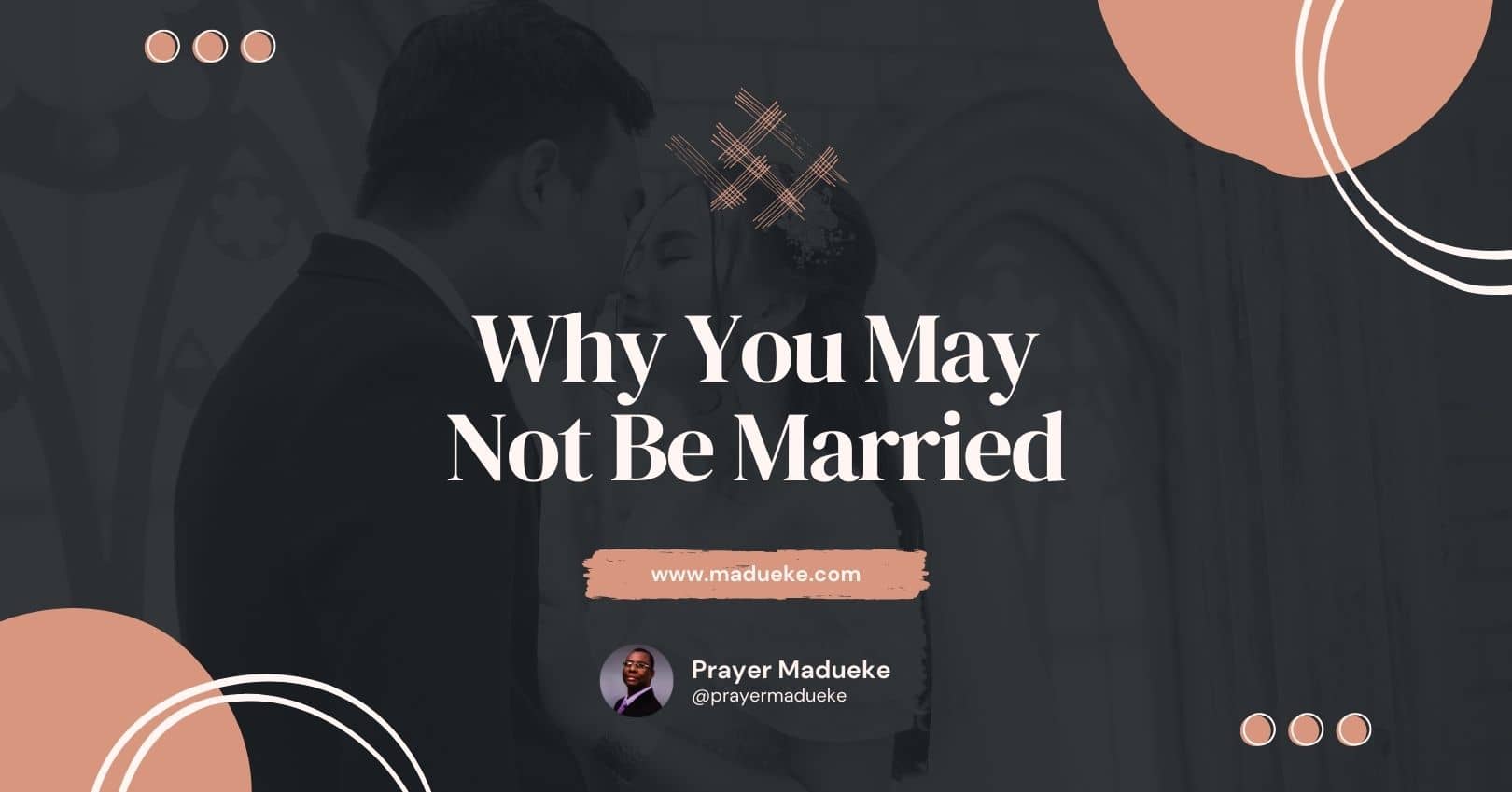 Most people desire to marry, and that desire is not unfounded. After all it pleased God to create a place of marriage for two people to share their lives together. However, that is not the only reason God endorsed marriage and that is why there are things you ought to know and be prepared for before going into marriage so as not to be taken by surprise.

The choice of who to marry is never a decision to be done in haste. A lazy person that is looking for someone to marry because he or she wants to live comfortably would likely not fulfill God’s purpose for marriage.

“Love not sleep, lest thou come to poverty; open thine eyes, and thou shalt be satisfied with bread”

Marriage is fundamental to the stability and continuation of societies. When adults do not marry, there would be lack of peace in many families. In addition, when people refuse to leave and cleave, they eventually block the way for others to progress. However, unseen forces hold back many people’s destinies. Even when such victims determine to marry, they cannot break loose from those forces holding them back. Others even go ahead to marry wrong people, who would later force them into unimaginable misery. Marriage is a necessity but requires wisdom and prayers.

“And the LORD God said, It is not good that the man should be alone; I will make him a help meet for him”

It is tragic to marry someone who cannot complement your destiny and work. People who find themselves in such cases often live in their families like strangers. A breakdown of marriage results in breakdown of families, communities and nations. This is the primary reason for never-ending divorce and separation cases, which bedevil nations of the world today. Ironically, many victims of divorce and separation would run back to their parents’ homes to bother them. They fail to realize that after marriage, partners’ top priority is each other and not parents.

“Two are better than one; because they have a good reward for their labor. For if they fall, the one will lift up his fellow: but woe to him that is alone when he falleth; for he hath not another to help him up. Again, if two lie together, then they have heat: but how can one be warm alone? And if one prevails against him, two shall withstand him; and a threefold cord is not quickly broken. Better is a poor and a wise child than an old and foolish king, who will no more be admonished. For out of prison he cometh to reign; whereas also he that is born in his kingdom becometh poor”

What You Are Doing Wrong?

There is a stigma that follows adults who are yet to marry; for the female folk especially, the society tends to make life a tad unbearable for them and thus mount a lot of pressure on them. This can launch them into desperation and anybody that so much as bats an eyelid at them becomes a potential partner.

However, not allowing God to lead you to a right partner can result in regrets after getting married. The Scriptures equally made it clear that two is better than one because they have a good reward for their labor. Moreover, if one falls, the other will lift up his fellow. However, in many families today, the reverse is the case. Because of irreconcilable differences, when both the man and his wife fall, none can lift up the other. This is also one of the reasons we have more widows on earth today. Couples defile the institution of marriage on daily basis. That is why one of the most effective witchcraft operations on earth today is the witchcraft of connecting two incompatible partners in marriage.

The spirit that causes adults not to be married must be confronted vigorously. All believers, including churches, must rise to fight this menace. Moses advised the tribes of the sons of Joseph to let the daughters of Zelophehad get married to whom they thought best. When one is due for marriage but is not married, there is an inclination that such person would be unhappy and this would affect people around him or her. In this way, such people become a burden to the family and community.

Giving in to the urgency to marry to escape the proverbial “biological clock” in the long run can lead to making the wrong decision and you end up in misery. Often times, there are power and spirits that delay your marriage. Despite all this, God has the power to set you free and bring you to his perfect will if you submit yourself to him. What are you waiting for? Discover the reason for your delay and allow God take over.

Prayers to Marry Without Delay

Previous article
Excellence: What It Will Cost You
Next article
Say Goodbye to Evil Habits!