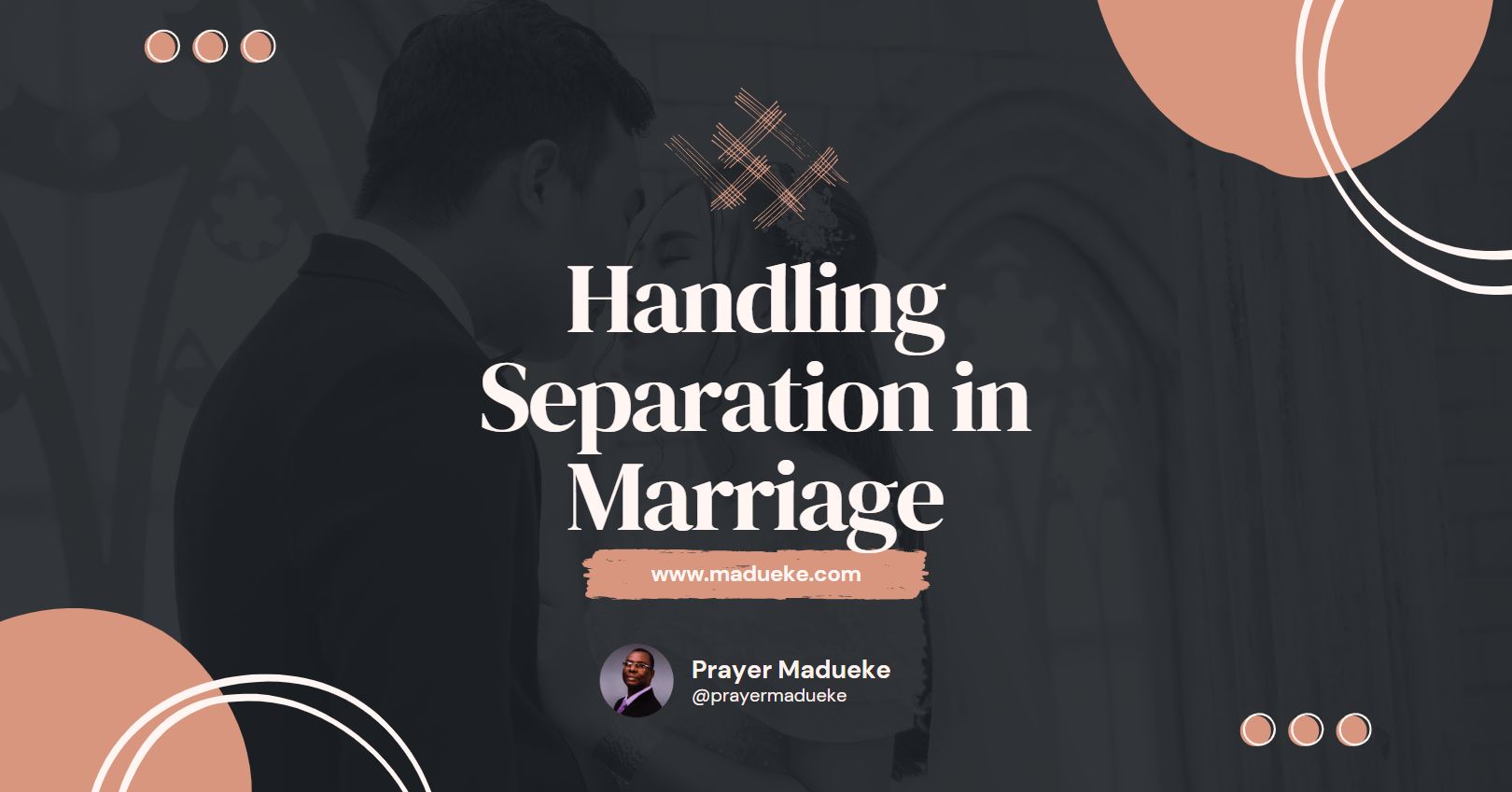 Separation is a state or period of time when legally married couples stay apart from each other, often due to irreconcilable differences. Today, numerous marriages are experiencing serious problems. Many husbands and their wives live under the same roof without talking to each other for an extended period of time. Couples that lived in the same home separate spiritually, while those who could no longer tolerate the sight of each other and lived differently separate both spiritually and physically.

However, we know that the only time a man and a woman have rights to remain separate is at the period of courtship before consummation of marriage. At this period, a man and woman are not allowed to join themselves together in any sexual relationship, not until their marriage is sealed.

And I say unto you, Whosoever shall put away his wife, except it be for fornication, and shall marry another, committeth adultery: and whoso marrieth her which is put away doth commit adultery”

Moreover, when you marry officially, the issue of fornication expires because married people do not commit fornication. The undeviating teaching of the scripture is that marriage is a lifetime union and relationship.

“And said, for this cause shall a man leave father and mother, and shall cleave to his wife: and they twain shall be one flesh? Wherefore they are no more twain, but one flesh. What therefore God hath joined together, let not man put asunder”

From the beginning, God instituted marriage as a union between one man and one woman. Hence the decree, ‘What God has joined, no man should put asunder’. Separation is not part of God’s perfect will.

“Now the birth of Jesus Christ was on this wise: When as his mother Mary was espoused to Joseph, before they came together, she was found with child of the Holy Ghost. Then Joseph her husband, being a just man, and not willing to make her a public example, was minded to put her away privily. But while he thought on these things, behold, the angel of the Lord appeared unto him in a dream, saying, Joseph, thou son of David, fear not to take unto thee Mary thy wife: for that which is conceived in her is of the Holy Ghost. And she shall bring forth a son, and thou shalt call his name JESUS: for he shall save his people from their sins. Now all this was done, that it might be fulfilled which was spoken of the Lord by the prophet, saying, Behold, a virgin shall be with child, and shall bring forth a son, and they shall call his name Emmanuel, which being interpreted is, God with us. Then Joseph being raised from sleep did as the angel of the Lord had bidden him, and took unto him his wife”

Handling complications in marriage require wisdom. However, one thing you must know is that marriages face one challenge or the other and there are not exceptions. Your family’s problem may be different from that of the other marriage. However, that does not mean that the other marriage is immune from problems. Therefore, when you experience problems, understand that you are not the first person to face problems, and would not be the last to experience problems. More so, God has provided perfect solutions to every problem on earth.

“And Moses was content to dwell with the man: and he gave Moses Zipporah his daughter. And she bare him a son, and he called his name Gershom: for he said, I have been a stranger in a strange land”

Even Moses ran into a lot of issues. Without consulting God, he made the decision to wed Zipporah, only to find out later that she had different religious beliefs from him. Before choosing Zipporah as his wife, he knew nothing about marriage. He left Egypt with nothing in his hands. He chose to live in the woods rather than in the luxury of a palace. He married the person out of convenience despite his desperate need for accommodations. He married the pagan daughter of a Midiani priest. He knew little or nothing about his wife, the god she was dedicated to and her convictions before he accepted to marry her. He married in the dark, without any instruction, counsel or guidance from God. He entered into marriage in a hurry and later it caused him many sorrows. Moses’ marriage did not only put him in trouble, it also put others into trouble.

It is very dangerous to marry a wrong person. It can cause many troubles in future. Nevertheless, when you trust God, He is able to intervene and bring perfect solutions that you need. Bad marriage results to conflicts, hostilities and incessant problems.

“And it came to pass by the way in the inn, that the LORD met him, and sought to kill him. Then Zipporah took a sharp stone, and cut off the foreskin of her son, and cast it at his feet, and said, Surely a bloody husband art thou to me.So he let him go: then she said, A bloody husband thou art, because of the circumcision”