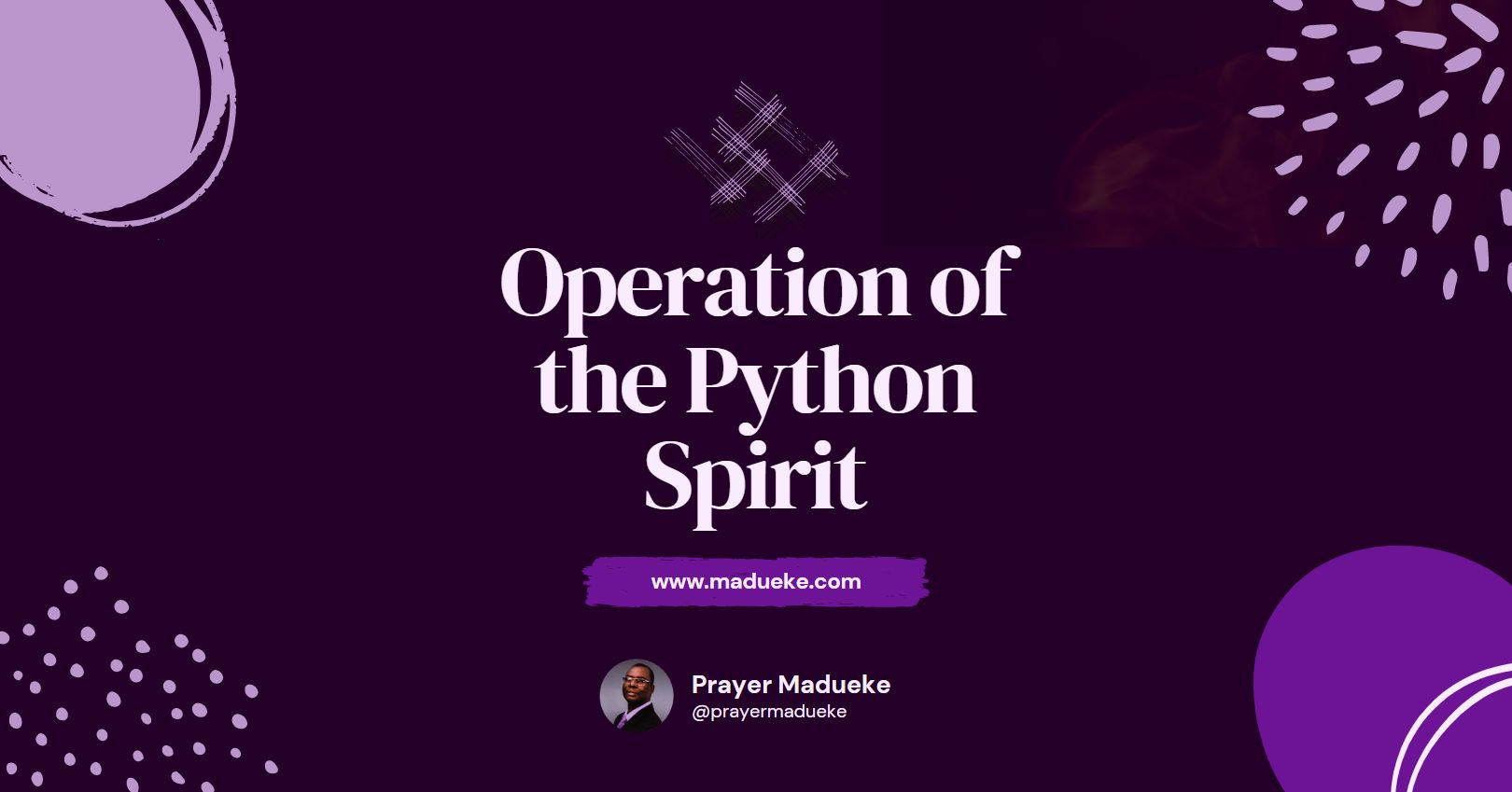 Python spirit, Cobra and serpent are all under a principality called Leviathan which is in charge of all fearful animals both in the water, air and land. Python, Cobra and serpents are messengers of Leviathan the beast, the prince of death and hell. Any covenant with him is a vow unto death. All satanic army is under the control of Leviathan. All big and small serpents of every color are under Leviathan. The kingdom of Leviathan is covered and fortified with thick darkness. Their agents always seek to control people anywhere they find themselves.

Any plan, command, or instruction issued by his emissaries is followed up by demonic spirits in order to carry it out. Their words are backed up by destruction, and they are not willing to let the words spoken by one of their agents be compromised by any other word. Their influence is felt practically everywhere, but particularly in the seas. His operatives are brazen and bold enough to commit any atrocity in front of onlookers. They attack their prey and slaughter them mercilessly. When a woman has the serpent or python spirit, she resists her husband’s authority and tries to exert control over everyone in her vicinity. They hate to submit to authority. Their head Leviathan is the only principality that a whole chapter of the Bible was given to in (Job 41). Every war against God and man, past, present and future has been led and will be led by this satanic warlord, Leviathan with his messengers- python, serpents and other fearful animals.

Python is a monstrous serpent; a large oviparous snake with a forked narrow tongue which they repeatedly flick out. As they flick their tongues out, the ignorant may think they are just playing. No, but they use it to sense odor or things around them. This means that their tongues serve as an organ of smell. This is why demonic agents can program leviathan serpents to go and strike a person. They easily trace and locate their victims through odor emanating from the victims’ clothes. This is why agents of leviathan operate the same way dogs do. A dog can easily identify ten different people within a family through their unique odors. So, if a stranger comes in, the dog will know that the stranger is different. Python spirit-possessed people are known for falsehood, divination and enchantment. Python serpents are trusted agent of the devil, acting more or less like the devil in nature

Now the serpent was more subtil than any beast of the field which the Lord God had made. And he said unto the woman, Yea, hath God said, Ye shall not eat of every tree of the garden? And the serpent said unto the woman, Ye shall not surely die: For God doth know that in the day ye eat thereof, then your eyes shall be opened, and ye shall be as gods, knowing good and evil.

The spirit of Python is a hooded snake with venomous poison which is not easily cast out or their diseases cured easily. It can resist deliverance ministers and manipulate them at times. It’s possible for the python spirit to dissuade his victims from finishing their deliverance program. Two women from my former church who often sought deliverance but never received it are an example of this. His victims are physically and spiritually constrained to a certain degree.

In the fourth year of King Darius, the word of the Lord came to Zechariah on the fourth day of the ninth month, the month of Kislev.  The people of Bethel had sent Sharezer and Regem-Melek, together with their men, to entreat the Lord  by asking the priests of the house of the Lord Almighty and the prophets, “Should I mourn and fast in the fifth month, as I have done for so many years?”

Then the word of the Lord Almighty came to me: “Ask all the people of the land and the priests, ‘When you fasted and mourned in the fifth and seventh months for the past seventy years, was it really for me that you fasted?  And when you were eating and drinking, were you not just feasting for yourselves? Are these not the words the Lord proclaimed through the earlier prophets when Jerusalem and its surrounding towns were at rest and prosperous, and the Negev and the western foothills were settled?’”

One of Satan’s main agents, the python spirit, possesses egregious evil traits. Given these horrifying traits that cobras, snakes, and pythons possess, it seems unlikely that these archenemies of humanity will have compassion for their victims. The human manifestations of the Python spirits look down on everyone and grant his agents boldness everywhere. His promise to any human is unbreakable, and he will always rule over and give instructions as the higher party in any interaction. The size of your body’s organs changes as the Python spirit is programmed into the sea of your life. But this will not be your portion as you engage in fervent prayers.