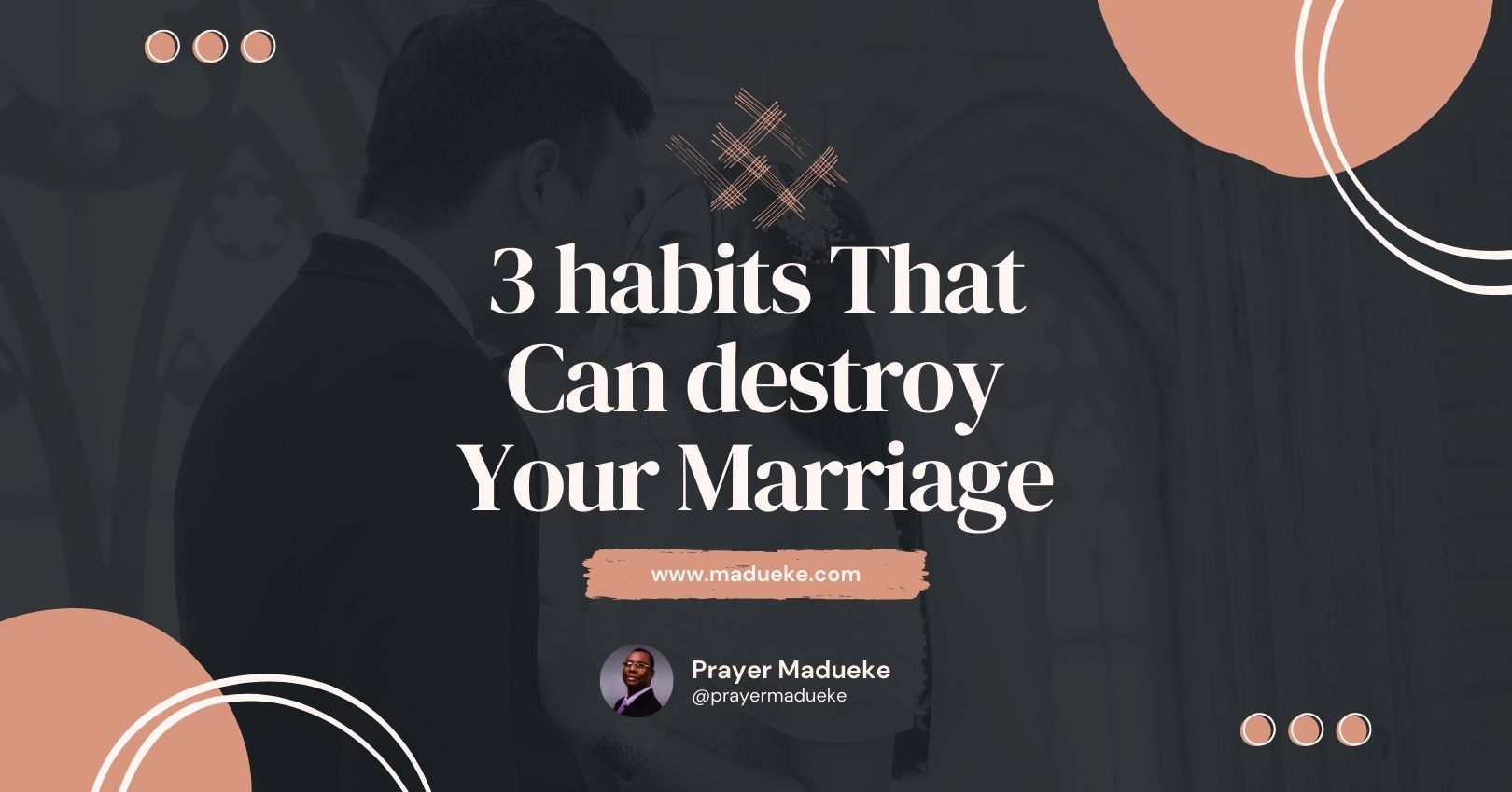 Marriage is a commitment to spend the rest of your life with another person. At some point in your marriage, you may find yourself between a rock and a hard place. It is possible that you may begin to question whether you made the right decision to be with this person. However, over the course of your marriage, you may have developed habits that may be destroying your marriage without your knowledge, and this is all the devil needs to back you up on the wrong track. We already talked about knowing God’s plan for your marriage and allowing challenges to destroy it is not one of them. Here are 3 habits that can destroy your marriage:

1. Not leaving and cleaving

The whole idea of marriage is to leave and cleave. Yet this has remained a big problem in some families. God commanded that you leave and cleave to your partner. When you make a commitment to be with someone, they become your family.

“But from the beginning of the creation God made them male and female. For this cause shall a man leave his father and mother, and cleave to his wife; And they twain shall be one flesh: so then they are no more twain, but one flesh. What therefore God hath joined together, let not man put asunder”

During your childhood, your parents, siblings, and other family members were your foundation. You could rely on them. Now that you are married, your partner assumes that role. They are the ones you should rely on now. This means preferring one another and bearing each other’s burdens together as a unit. Failure to leave and cleave has caused so many problems in families. Whoever or whatever that comes between you and your legally married partner is an enemy. This is part of God’s word, and obedience to God’s word brings you nothing short of joy, happiness, and peace.

It is not entirely possible that your partner will not offend you in the course of your marriage, no matter how holy they may be. Is this a reason to seek solace outside your marriage? Absolutely not! Not forgiving your partner can create barriers between the both of you, and such barriers give the devil enough space to occupy. There are husbands and wives who stop talking to themselves because of minor issues.

Gradually, your resentment toward them becomes greater than your love for them and kills the affection between the two of you. Seeking satisfaction outside soon becomes an option as the devil dangles it in front of you. Nevertheless, God has commanded us to forgive one another and continue in love for each other.

“For where two or three are gathered together in my name, there am I in the midst of them. Then came Peter to him, and said, Lord, how oft shall my brother sin against me, and I forgive him? Till seven times? Jesus saith unto him, I say not unto thee, Until seven times: but, Until seventy times seven. Therefore is the kingdom of heaven likened unto a certain king, which would take account of his servants. And when he had begun to reckon, one was brought unto him, which owed him ten thousand talents. But for as much as he had not to pay, his lord commanded him to be sold, and his wife, and children, and all that he had, and payment to be made. The servant therefore fell down, and worshipped him, saying, Lord, have patience with me, and I will pay thee all. Then the lord of that servant was moved with compassion, and loosed him, and forgave him the debt. But the same servant went out, and found one of his fellow servants, which owed him an hundred pence: and he laid hands on him, and took him by the throat, saying, Pay me that thou owest. And his fellow servant fell down at his feet, and besought him, saying, Have patience with me, and I will pay thee all. And he would not: but went and cast him into prison, until he should pay the debt. So when his fellow servants saw what was done, they were very sorry, and came and told unto their lord all that was done. Then his lord, after that he had called him, said unto him, O thou wicked servant, I forgave thee all that debt, because thou desiredst me: Shouldest not thou also have had compassion on thy fellow servant, even as I had pity on thee? And his lord was wroth, and delivered him to the tormentors, until he should pay all that was due unto him. So likewise shall my heavenly Father do also unto you, if ye from your hearts forgive not everyone his brother their trespasses”

3. Putting conditions on love or affection

In marriage, you must have a kind affection for one another. This means being vulnerable to one another. It so happens that sometimes you might be waiting for your partner to do things for you before you reciprocate. This should not be a requirement for showing love to your partner; always try to do good first. Do not wait for your partner to do it first. Your marriage should not be based on who did it first; rather, you both should show each other love and affection without conditions.

“Be kindly affectioned one to another with brotherly love; in honor preferring one another”

Marriage is far from simple, but when two people are dedicated to making it the best relationship they have, God is glorified and they experience the abundant life of love and laughter that God desires for them. If these habits exist in your marriage, you would do well to break them. Involve God in your family and obey his words concerning your marriage.