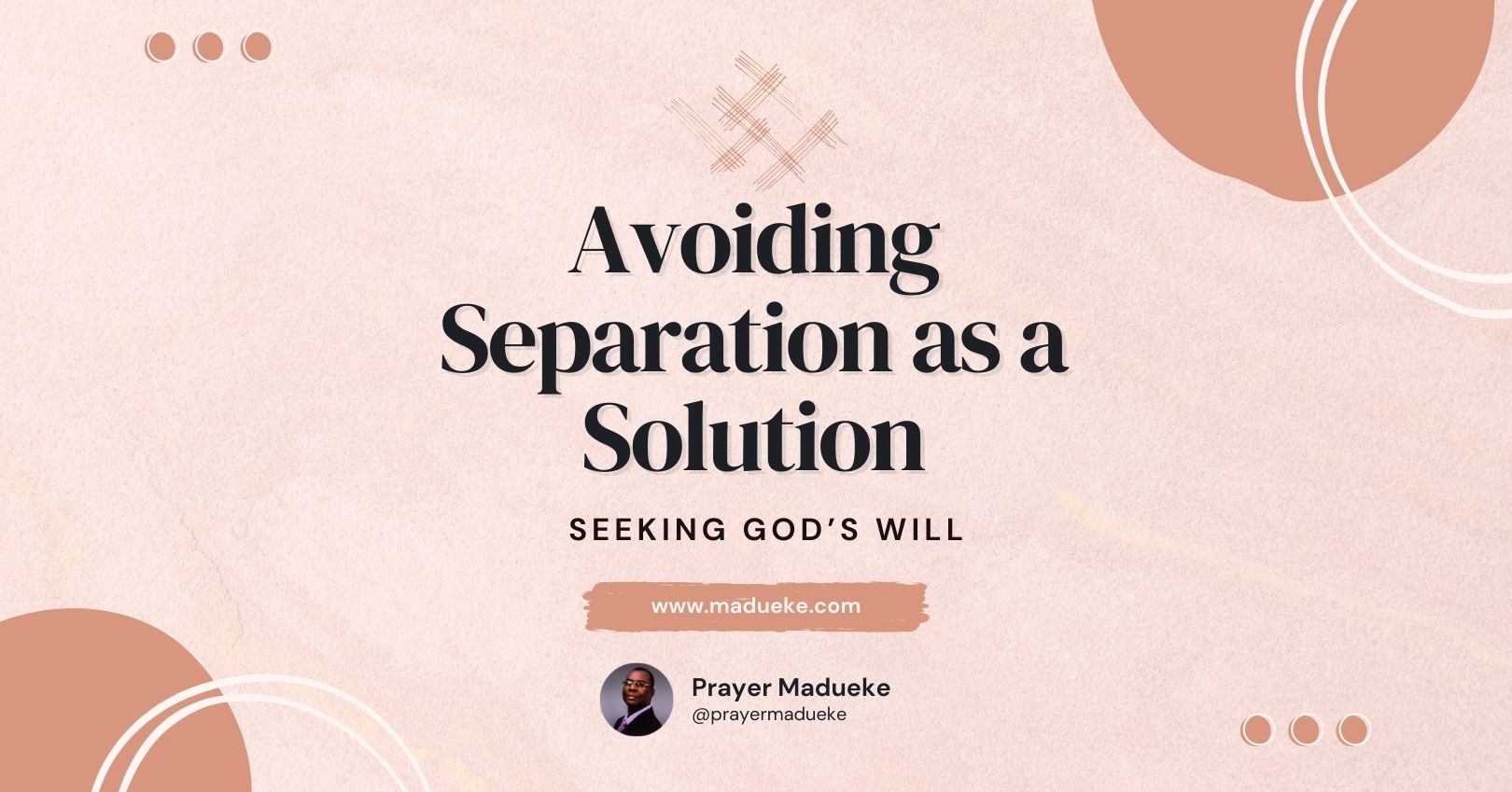 Separation is a state or period of time when legally married couples stay apart from each other, often due to irreconcilable differences. Today, numerous marriages are experiencing serious problems. Many husbands and their wives live under the same roof without talking to each other for an extended period of time. Couples who live in the same house spiritually separate, while those who can no longer bear the sight of each other spiritually and physically separate.

However, we know that the only time a man and a woman have the right to be apart is during the courtship period before marriage. At this period, a man and woman are not allowed to join themselves in any sexual relationship, not until their marriage is sealed.

When you are officially married, the issue of fornication disappears because married people do not commit fornication outside their marriage. The Bible’s unwavering teaching is that marriage is a life-long union and relationship. From the beginning, God instituted marriage as a union between one man and one woman. As a result, the decree states, “What God has joined, no man shall separate man and one woman.” Hence the decree: “What God has joined, no man should put asunder.” As such, separation is not part of God’s perfect will.

“And said, for this cause shall a man leave father and mother, and shall cleave to his wife: and they twain shall be one flesh? Wherefore they are no more twain, but one flesh. What therefore God hath joined together, let not man put asunder”

Sometimes in your marriage, it is better to hearken to God’s instruction and follow it rather than your own thoughts. When Joseph found out that Mary was pregnant, his first thoughts were to put her away, but God did not permit him. Joseph was determined to put Mary away secretly and marry another woman. Thankfully, he instead, obeyed God’s instructions. This is why when you have faith and are patient with God, He is able to correct every negative thing you may notice in your partner’s behavior or conduct.

Similarly, separation may not necessarily be the best solution to the serious conflict you are facing in your marriage right now. Like Joseph, seek God’s guidance and direction on what to do. God is able to instruct you on a path to follow that will lead you to His goodness and mercies. You only have to listen and obey his instructions.

Also, you need to pray for the spirit of wisdom. You need wisdom because people have died trying to live together when their partner wishes they had separated. For safety reasons, some people have separated instead of risking death or being killed by their partners.

Additionally, the problem may not always be the conflict itself but a lack of knowledge on how to handle conflicts when they present themselves. Whatever kind of conflict you are experiencing right now, God knows about it even before it came into being, and He is able to provide the perfect solution you need.

Previous article
The Python Spirit: A Threat to Genuine Christianity
Next article
The Dangers of Summoning at Evil Altars