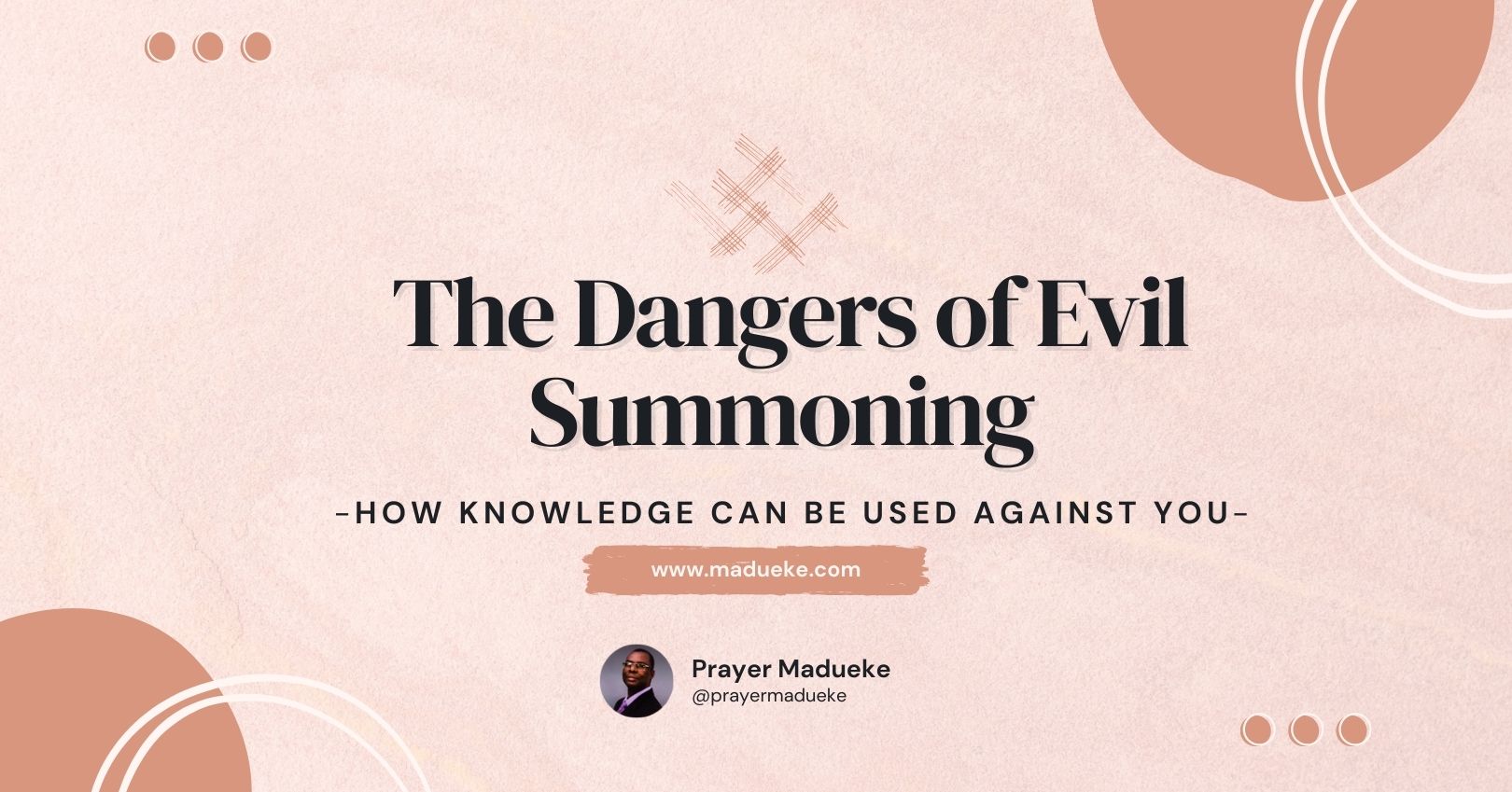 A person’s information can be obtained through an evil summoning, which can then be used against them. Evil summoners take communication, knowledge, and intelligence reports seriously. A person can be summoned by a chief village demon to investigate and gather details about them. A sacrifice can be made to summon the chief priest of a person’s family or city to obtain information about the person that can be used against them in the present or future.

In that case, the evil spirit in that place can appear transforming itself as if it is a particular person in that city. If you summon the spirit in charge of a place, it can appear and talk to you with the body of the person you will believe. An evil spirit can be summoned to appear with your husband’s or wife’s face or body to have sex in the dream. Your friend’s body can be summoned by your enemy to attack you in the dream. A personality can also be summoned by your enemy and he can appear to you as a friend. Satan himself can be summoned to appear to a person as an angel of light to obtain information to destroy, kill or steal.

And no marvel; for Satan himself is transformed into an angel of light.

Summoning deceased individuals is associated with the devil. The information provided by the summoned spirit may be accurate, but it is often mixed with lies to deceive those who are easily misled. The spirits may even claim to be figures such as Samuel, an angel, Christ, or God. While they may have some accurate information, they may also manipulate it to confuse the listener.

Then said the woman, whom shall I bring up unto thee? And he said, Bring me up Samuel. And when the woman saw Samuel, she cried with a loud voice: and the woman spake to Saul, saying, why hast thou deceived me? for thou art Saul. And the king said unto her, Be not afraid: for what sawest thou? And the woman said unto Saul, I saw gods ascending out of the earth. And he said unto her, what form is he of? And she said, an old man cometh up; and he is covered with a mantle. And Saul perceived that it was Samuel, and he stooped with his face to the ground, and bowed himself.

These are the spirits that supply information about a person, a place or thing to happen. These personalities are not real. They do not have the power to bring a true child of God through evil summon after death. They can only summon a familiar spirit that can transform himself as Samuel or anyone else. The woman who summoned Samuel’s familiar spirit is also deceived and was being used to deceive others. A dead person’s real body cannot be summoned but a familiar spirit can appear in the form of such a person.

And he cried and said, Father Abraham, have mercy on me, and send Lazarus, that he may dip the tip of his finger in water, and cool my tongue; for I am tormented in this flame. But Abraham said, Son, remember that thou in thy lifetime receivedst thy good things, and likewise Lazarus evil things: but now he is comforted, and thou art tormented. And beside all this, between us and you there is a great gulf fixed: so that they which would pass from hence to you cannot; neither can they pass to us, that would come from thence.

A familiar spirit can appear in a mask using the body organs of another person. Even in the kingdom of God, God can appear to heal, deliver his children using the body of his true servant to appear. No one should be deceived when Satan does the same.

And no marvel; for Satan himself is transformed into an angel of light. Therefore, it is no great thing if his ministers also be transformed as the ministers of righteousness; whose end shall be according to their works.