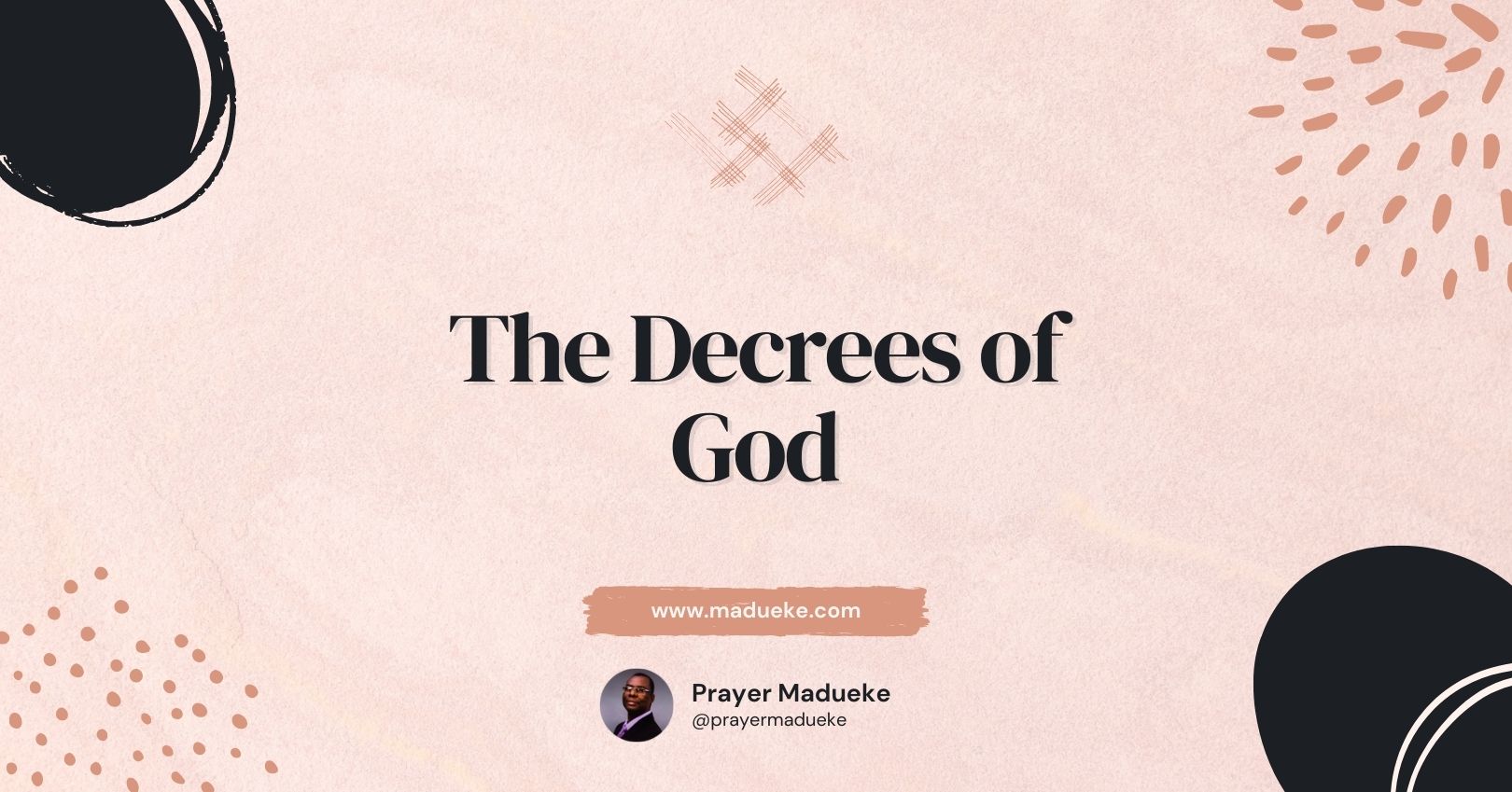 It is important to know what a decree is, what it means, and what happens when decrees are made. Decree is a strong and unshakeable utterance or exercise of power through word and command, which is more of a certainty. It can also be an order that has force equal to a law, or a religious ordinance enacted by a council or a particular head.

When we talk of “decree,” we mean to give or issue a command, or to “enjoin,” as if by decree, or to determine to order a judicial punishment. It is like pronouncing a law to be enacted by the legislature. In every democratic government, the executive, legislative, and judiciary share power and run the government. However, in God’s kingdom and government, it is not so.

God the Father, Son, and Holy Ghost are one God, and God operates with absolute power. His government is theocratic. He has unlimited power to do or undo anything he wants. He has the absolute power to kill and give life. His words are final, and His rule reaches the heavens and the earth. His decree is powerful and can change any situation, no matter who is involved.

God’s absolutism can be seen throughout the ages, even to the end of this age. He is not obligated to consult anyone or seek approval before taking any action. His words are decrees, for he is omnipotent. Without assistance from anywhere, God alone decreed, and the heaven and the earth appeared by the great power of God. God is so powerful that He can just decree anything and it will be exactly as He decreed it. No matter the claims of earthly wise men and numerous scientists through their groundbreaking discoveries, God created and allowed it all.

And so, the activities of the dark powers, all their works and mysteries, amount to nothing before God’s decree. The first decree that God issued against the languages of the world still stands today. All the wise men of the world, together with all the universities, have not been able to restore one language to mankind. The terrible and unsolved language barriers all over the world today are a result of God’s decree against men’s resolve and evil agreement.

“And the LORD said, Behold, the people is one, and they have all one language; and this they begin to do: and now nothing will be restrained from them, which they have imagined to do”

“Go to, let us go down, and there confound their language, that they may not understand one another’s speech”

When God makes decrees against evil men, no one can change them. There were once people in cities called Sodom and Gomorrah who were gays and lesbians. They committed homosexuality without restriction, even under the government of their day. No one could control them; not even the righteous could persuade them to stop. They were evil and determined homosexuals who could go into any house and defile even the righteous. The cries of the people they forced into homosexuality were so great. Their sins were so terrible that God had to come down because of the cries of the people they defiled.

Lot, who was a child of God, was living among these people, but he did not use any word of decree against the evil men of his generation. The days of Lot have returned, as Jesus Christ rightly told us. Believers should rise up and decree against the wickedness of these days, or else many shall be wasted.

There are many evil groups that are rising up all over the world, with the support of the governments of the nations. Many laws have been passed that are contrary to God’s law and those of His people. Hence, it is time for true believers to rise up and decree against all these evils taking place in the world today. Some determined and unrepentant sinners need to be decreed against so that God’s fear will spread all over the earth and people who are under captivity will be delivered.